The word centaur comes from Greek Κένταυροι, which has an obscure origin. It has been suggested that it is a compound word formed from ken and tauros which would roughly translate as piercing bull-stickers, piercing bull or bull-slayer. Knowing enough history and Greek to be dangerous, I would like to offer another (more useful, though less authoritative) alternative.

One of the possible origins of the centaur is the first encounters of non-riding Minoans with horse mounted nomadic tribes. Given the dichotomy of civilized vs. barbarian culture, the word may very well have originally been a negative epithet.

One possible (and most likely a grammatically incorrect) translation of ken is absence. Built into this is a connotation that morality and civilized behavior is what is absent. Therefore ken can also be translated as depraved. Therefore, centaur might mean depraved bull — monstrous, barbarian beast men.

Given this understanding, centaurs cease being the idyllic, peaceful creatures that we have come to know them as. This makes sense in context of the story of their conflict with the Lapiths when centaurs tried to kidnap all of the Lapith women on the wedding day of the Lapith King, Pirithous.

All of this is a long-winded explanation of why I chose to name the halfling dog centaurs that invaded my fevered dreams this past week Censtyl and why I chose to make them Chaotic. The name can be understood to mean depraved dog.

Like a war club, a sword, or a sharp arrow is one who bears false witness against a neighbor. — Proverbs 25:17-18 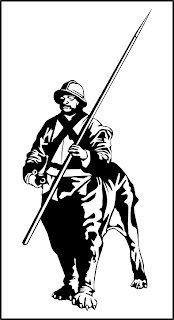 Number Appearing: 2d10
% in Lair: 10%
Alignment: Chaotic
Movement: 150' (50')
Armor Class: 5
Hit Dice: 3+1
Attacks: 2d4+1/2d4+1/weapon or 1d8 (missile weapon)
Special: Attacks as a 6HD creature with missile weapons
Save: F4
Morale: 9
Hoard Class: XXII
XP: 100
Censtyls have the body and legs of dogs, but the upper body of halflings. While they are gregarious among themselves and those they trust, they live far from other humanoids in densely wooded areas which they fiercely defend from outsiders. They are able to attack with their front claws, as well as attacking with a weapon. Centstyls are expert marksmen, thus they attack as 6HD creatures when using any missile weapon and do 1d8 damage instead of the normal 1d6.