R is for Old School Wisdom

I am not ashamed to say that I do not have a whole lot of disposable income for the purposes of purchasing material for the hobbyist in me. There are other folks in my life that are more important to me than the games I play. That being said, I do allow myself a purchases now and again. I mostly indulge in .pdfs because I can stretch my money more and they don't take up any room on my already overflowing bookcases; however, occasionally I do put a physical book on my wishlist. One such book was Michael Curtis' Dungeon Alphabet because this one of those resources that I felt I would get more out of by holding in my hands as opposed to being a bunch of electronic data (my instincts were correct). Unfortunately, this also meant I had to wait until such time I could give myself enough of an excuse to shell out the extra dough in order to get it.

Thus, I only received my copy this past weekend; however, its arrival came with it a funny story wrapped up in a little wisdom. When I opened the package containing the Dungeon Alphabet, my 6-year old son was immediately drawn to Erol Otis' cover art. He was especially enthralled by the fact it was so obviously an alphabet book (much cooler than anything he has seen at school) and very proudly started to identify the letters on the cover. Having not yet gone through all the illustrations to make sure they were age-appropriate, I stuck to the familiar cover art and started playing "A is for ____." We started at the bottom, because it was the first that entered by brain: 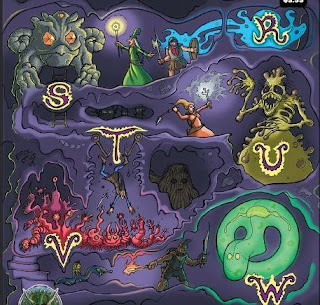 At this point I drew a blank. Therefore, I decided to see if my son could come up with anything surprising. So I asked him what he thought the R was for. His response was just awesome:

Out of the mouth of babes (Psalm 8:2; Matthew 21:16). It just goes to show that there is an inherent wisdom in at least some the ways we old school players expect to play our games...