Awake, O man, and recognize the dignity of thy nature. Recollect thou wast made in the image of God, which although it was corrupted in Adam, was yet re-fashioned in Christ. — Sermon On the Feast of Nativity VII

…recognize thy parentage, to become free after slavery, to be promoted from being an outcast to sonship: so that, thou who wast born of corruptible flesh, mayest be reborn by the Spirit of God, and obtain through grace what thou hadst not by nature, and, if thou acknowledge thyself the son of God by the spirit of adoption, dare to call God Father. — Sermon On the Feast of Nativity II 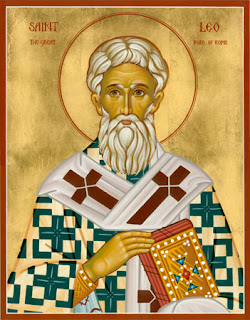 Today is the Feast of St. Leo the Great, who I count among my friends. This may seem strange, considering that Leo lived and died fifteen centuries ago; however, we Orthodox Christians believe he is alive in Christ and I have gotten to know Leo through his writing.

I do not have fond memories of Christmas growing up. My family is small, estranged and far-flung. The two largest emotions I associate with my childhood Christmases are anger and disappointment. There were always fights and presents never lived up to my own imagination or expectation. Thus, I have a real tendency to be very cynical about the holiday — especially with the way it is treated by 21st century America.

A number of years ago, I found it necessary to do some research on Christmas. In the course of this project, I ran into St. Leo and his sermons on the Nativity. He convinced me, through his love, his enthusiasm and his eloquence that Christmas is indeed one of the great Christian feasts that deserved my own love and enthusiasm. I often go back to his writing in order to have my friend remind me how important it really is. For that, I am eternally grateful to him.

I mention this as a prelude to this post, because St. Leo is most famous for his writing, specifically a letter to Flavius the Bishop of Constantinople which is more popularly known as The Tome of Leo. The Church of the fifth century continued to be embroiled in Christological controversies. The Tome of Leo was written in response to the Christology of Eutyches, a monophysite (meaning one nature and which over-emphasized Christ’s divinity to the exclusion of his humanity).

The Tome was famously ignored out of hand by the Second Council of Ephesus (A.D. 449), where it wasn’t even allowed to be read. St. Leo would go on to call the council a “den of thieves” and it went down in history as the Robber Council. The Tome of Leo was finally adopted as orthodox at the Council of Chalcedon (A.D. 451), which would later be ratified as the Fourth Ecumenical Council.

It occurs to me that though tomes filled with lost knowledge and revelation are one of the great tropes of both this hobby and of the pulp fantasy/sci-fi which it uses as its inspiration, these tomes often contain some forbidden knowledge of great evil. The Necronomicon immediately comes to mind. Therefore, there is a lot of room for similar tomes that, rather than containing the forbidden, are revelation.

Since I am in the middle of a thought experiment where I am imagining a version of Basic D&D that only uses the monsters from the Fiend Folio, I think it apropos to imagine a campaign set in the distant future that such an edition strongly suggests. Personally, I find it quite compelling to throw a copy of The Tome of Leo at a world based on Vance’s Dying Earth. What kind of impact would such a text have on a people who had forgotten Christ? Who would want it found? Who would want it destroyed? An entire series of adventures could center around the party being one of many that are trying to find the Tome in order to protect or destroy it.

The aspect of this I like best is the implied end game. This isn’t just about finding the Tome, but also about what happens afterwards. Power structures will be threatened and created and the PCs will be right in the middle of things. It is a great excuse to break out ACKS.


The Tome of the Lion

This is a gold covered tome some 18” wide and 24” tall and 4” thick, decorated with the image of a lion made entirely of precious stones. The interior is an illuminated holy text along with various commentaries. Based on these materials alone, it is worth at least 50,000gp and even more to those who share the faith of the text.

This book, however, also radiates of magic. Its powers become manifest when the tome is placed upon a corpse. The lion will animate, roar and allow the person who placed the tome to speak with the dead. The lion will be the mouth piece of the corpse in question. The spell will allow 1d4+1 questions to be asked, after which the lion will go back to its original form. There is a 1 in 4 chance that the dead questioned will answer falsely. This chance goes up if the one doing the questioning is responsible for the corpse’s death. This power is usable once per day.