While I was bedridden last week, I spent quite a bit of time with REH and his creation Conan. Since the latest Hollywood version has been deemed a disaster by just about everybody, I had decided to get my Conan fix the old fashioned way. [BTW I myself do not have an opinion on the movie other than to say that I trust Hollywood about as far as I can throw California and I choose to spend my entertainment dollars on Netflix and the like, because it is has the wonderful side effect of changing customer expectation and therefore threatening the status-quo among our entertainment elite.]

One of the things that I found most fascinating is the way REH played with the theme of civilization vs. barbarism. My take on REH is that he sees both as necessary and as correctives for the abuses of the other. As they come into contact with each other, each must necessarily adapt or perish. This view flies in the face of the Alignment systems of D&D, which are more or less static. Personally, I believe REH is much closer to historical reality than D&D's alignment system.

Let me explain by first drawing attention to this simple diagram: 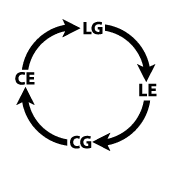 Every society goes through this cycle. If we begin with a benign government (the form does not matter) we have a LG society. Eventually, the need to maintain government control over society supersedes the welfare of the citizenry or the ruling elite simply lose touch with those over which they rule. Thus, society drifts toward LE. This transition can happen gradually over time or happen overnight, depending on the situation.

In response to an oppressive (LE) government, rebellions and revolutionaries rise up. These movements, at least in their beginnings, are CG. At their best they dip into the necessary evil of war (thus briefly becoming CE) and then replace the existing government with what they hope is a LG regime. At their worst, they drag society into anarchy (CE) which demands that someone rise up to bring order. This LG impulse will either result in benevolent stability (gradually devolving into LE) or it will dive quickly into another LE situation where order is more important than individual welfare.

For example: The Weimar Republic can be classified as a LE society (it played fast and loose with morality). Both the fascist and communist movements began as a positive alternative to the failures of the Weimar Republic (portrayed as the failure of capitalism). Both movements quickly dived into CE as they purposely fostered chaos and anarchy in the streets. The fascists used this opportunity to offer the Germans order and stability. The German people, in hopes of a LG alternative to the chaos of the Weimar Republic ushered in the Nazi era of Germany, which quickly became LE.

This cycle reflects the old adage that today's revolutionaries are tomorrow's establishment. Even Conan himself shifted from being the barbarian outsider to being the King of Aquilonia. Thus, people, movements and societies can shift from one alignment to the next over the course of a lifetime. It is not beyond the realm of possibility for these shifts to happen more than once.

This reality also suggests why the D&D alignment system rubs so many of us the wrong way. It isn't that it flies in the face of historical reality, it is the fact that it tries to do two things at once:


As I meditate on this, I am coming to believe that these two things are mutually exclusive.

Attitudes and beliefs are not static. Even in context of my own Christian faith, there is an expectation of growth — a lifetime is a journey whose goal is becoming more and more like Christ. This growth necessitates change. On the other hand, mechanics such as spell effects and alignment languages are static. Protection spells are designed to always help my guys against the other guys. One can't exactly forget an entire language just because one's attitudes or beliefs have changed.

I am inclined to answer this conundrum by going back to the wargaming roots of the game. Alignment was originally designed to mark which troops were available to which side. Lawful armies could take Lawful troops. Chaotic armies could take Chaotic troops. Both armies could use Neutral troops. In other words, it wasn't about behavior, ethical systems, philosophy, etc. It was simply about which side a troop type was willing to fight for.

I am reminded of Eddie Valentine, the mobster from the movie Rocketeer. Upon finding out that his employer was a Nazi spy, he and his cohorts immediately switched sides because when push came to shove, they were willing to fight for America but not Nazi Germany. In other words, the fact that they were criminals who we would label as evil was irrelevant in the question of his alignment with the U.S. over Germany.

Thus, a proper alignment system should be divorced from questions of good vs. evil behavior. Rather, it should have to do with sides. What those sides are depend upon the campaign world. They could have magical and/or supernatural elements — aligning oneself to the Church or to the College of Magic, for example. Most properly, alignment should bring with it mechanical advantages that are paid for through obligation — if the College of Magic is being persecuted by the authorities, characters aligned with the College would be obliged to come to its defense. Neutrality would then have a real meaning (as opposed to the meaningless nihilism that it usually is in most versions of D&D). By forgoing all of the mechanical advantages, characters become free agents with no obligations.

I am very tempted to explore this idea further, because like Prestige Classes, they are a means by which players can engage in the campaign world through play.