Saintly Saturday: The Miracle of Archangel Michael at Colossae

It has been quite awhile since I did a Saintly Saturday, where I look to the Feasts of various Saints as an inspiration for RPG world-building and adventure. In my last post, I noted how James Maliszewski of Grognardia fame published a post about a map I drew for him about a decade ago. The map is of a ruined monastery that once guarded the world from foul aberrations of Chaos that bubble forth from the crags of Urheim.

It occurred to me that the The Feast of the Miracle of the Archangel Michael at Colossae, celebrated on September 6th, tells a tale that could have been an inspiration for someone running a campaign around the concept of The Monastery of St. Gaxyg-at-Urheim. 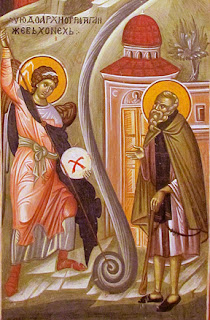 In what is now southwestern Turkey, there was a region called Phrygia and a city called Hierapolis.

Not far from the city was a church dedicated to the Archangel Michael. It was built by a pagan who had a vision of the Archangel directing him to have his mute daughter drink from a spring. After partaking, she gained her speech. He converted and had the church built over the spring.

The region had once been dominated by a pagan cult dedicated to some kind of serpent god. According to a 5th-7th century account of the Miracle at Colossae, Sts. John the Evangelist, Philip the Apostle, and Mariamne, Philip’s sister:

Slew the viper with prayer, as with a spear, putting it to death through the power of Christ.

It should also be noted that there was a pagan underwater spring called the Plutonium. It emitted poisonous gas and was thought to be an entrance into Hades.

About ninety years after the church was built, a boy called Archippos traveled to the Plutonium. Repelled by the gas, he went to the spring at the church and decided to dedicate his entire life to Christ. This was a pattern that repeated itself enough that the local pagans decided to destroy the church. For ten days, they worked to divert two rivers in order to wash away the church and the spring that was attracting so many to Christ. Archippos remained in the church praying fervently for the protection of God. Just as the pagans released their dam to unleash the rivers, the Archangel appeared and drove a staff into the ground, causing an earthquake that opened a chasm down which the waters flowed.

The pagans ran and the locals changed the name of the place from Colossae to Chonae, which means “plunging.” Today the city is called Honaz. In subsequent years, the area was ravaged by Persian invasion, multiple earthquakes, and civil war. The ruins of Hieropolis are a tourist spot where people bathe in baths and springs to this day.

This story has everything for the beginnings of a megadungeon-centered campaign:
I think the lovely part of all this is that implied in this story are multiple entrances into the dungeon where the snake cult  still harbors hatred for the civilizations of humanity that rejected it. How cool is this?