Towards a Holmesian Dungeon

What follows is not anything particularly new. Many of these ideas have been present within the hobby and explored throughout the years I have been maintaining this blog. My interest here is codifying what I consider to be the characteristics of a dungeon that can truly be called Holmesian — by which I mean a dungeon that puts into practice what the Holmes Basic Edition presents as Dungeon. It has been a quest of mine to find and/or create such a dungeon. This is intended to help both me and anyone else who shares this particular quixotic quest.

My introduction to the hobby of RPGs was the Holmes Basic Edition. While it did excite my imagination and was the gateway for me to spend years of my life playing various RPGs, I never really played the game as Homes presented it until Gary Gygax’s death. In the wake of this great loss to the hobby, I returned to the pages of Holmes to revisit my youth. What I found inside that blue cover was eye opening. Not only was it as inspiring as I found it back in the late seventies, but it presented a kind of dungeon design philosophy that I have only seen put into practice in part over the many years I have played the game.

In other words, what might be called a “Holmesian Dungeon” doesn’t introduce us to any really radical new ideas about what a dungeon is (it has been around since 1977, after all). Rather, it combines extant ideas about dungeon design in a distinct way. This uniqueness teases us with a dungeon adventure experience that, though filled familiar tropes, is, at its core, something that I really haven’t ever seen in all my years of playing.

What I seek to do here is delineate what I believe are the explicit and implicit characteristics of what I call a Holmesian Dungeon with the aim of creating a template for such an adventure to be created.

The Example Dungeon in the Homes Basic Edition provides for several large rooms with at least one dimension of 80 to 100 feet or more. 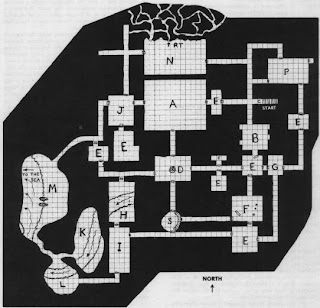 At first brush, one might not place much import on such a design feature, but a close reading of Holmes reveals that it is a deliberate choice. Melee movement in Holmes is slower than any other edition: an unencumbered character in Leather Armor moves 20 feet per round. Thus, larger rooms allow for encounter distances that make moving into melee a tactical choice. This is especially important for magic and missile weapons:

Once the party is engaged in melee, arrows cannot be fired into the fight because of the probability of hitting friendly characters.

In other words, designing a dungeon with large rooms specifically allows party members to take advantage of both the magic and missile phases of the game and to choose how long these phases are in effect by determining when the party engages in the melee phase of combat. It also allows the Referee to create encounters where it is the PCs who must figure out a way to close the gap in order to avoid the magic and missile phases.

Doors are Stuck or Locked

Holmes states that doors are usually closed and often stuck or locked. Opening doors is an important part of the game. It affords an opportunity to surprise monsters beyond the door, but also involves a risk of ruining that surprise. Brute strength can always open a door; however, failure means alerting any monsters that are behind the door. Thieves afford the party a means of opening doors where failure is silent. Magic-users can use a valuable spell slot for a Knock spell which guarantees a silent open door. Additionally:

Every door in a Holmesian Dungeon is a consequential tactical choice.

I should note, that in practice, I have found that failing to open a door with brute force shouldn’t result in the door remaining shut, it simply means that the door has been opened in such a way that surprise is impossible. Having players roll again and again just to open a door is tedious and ruins the flow of exploring the dungeon.

Unlike Moldvay, whose trap examples include poison gas with a Save vs. Poison or die, a ceiling block that does 1d10 damage if a Save vs. Turn to Stone is failed, and a pendulum blade that does 1d8 damage, Holmes understands that traps normally do not serve the purpose of causing damage to members of an adventuring party:

Traps should not be of the "Zap! You're dead!" variety but those which a character might avoid or overcome with some quick thinking and a little luck. Falling into a relatively shallow pit would do damage only on a roll of 5 or 6 (1-6 hit points at most) but will delay the party while they get the trapped character out. Hidden rooms, movable walls, teleportation devices, illusion rooms, dead ends, etc., make interesting variations.

Traps play the role of time waters. While some might pose an actual physical threat to player characters, they can be worked around given enough time. Along with trying to open doors, players must make the choice as to whether or not the time wasted on a trap is worth it. This choice becomes meaningful when one considers the real danger of a Holmesian Dungeon.

Wandering Monsters are the Real Danger

Holmes states that a Wandering Monster check should be made every three turns. Thus, everything that takes time in a dungeon brings with it the threat that monsters will come and investigate what the characters are doing. Given that Holmes specifies that a Wandering Monster on the First Level of a Dungeon might come from the Second or Third Level indicates that these Wandering Monster Encounters are not meant to be balanced or even winnable situations for the players. Dropping treasure in order to have the movement rate fast enough to run away can become a necessity. Larger rooms also allow for tactical retreat to be a realistic possibility. Implicit in this Holmesian reality is that a Dungeon Level can never truly be cleared…but more on that below.

Of the twenty-two rooms keyed in the Sample Dungeon of the Holmes Basic Edition, eight are labelled as Empty. Like the locked doors and time-wasting traps, these serve the specific function of forcing characters to make tactical choices as to whether or not spending time in a room that may or may not have a secret door or hidden treasure is worth it. Of course, there is a danger that game-play with become monotonous and boring as players encounter empty room after empty room. This is where the Implicit characteristics of a Holmesian Dungeon become important.

(Empty Rooms are Not Really Empty)

One of the curiosities of the Holmes Basic Edition can be found in its presentation of Magical Scrolls. Besides those that have a Protection Spell, scrolls are only usable by Magic-users. Additionally, there are scrolls that have spells that mimic the special effects of Magical Rings, Potions, and Wands. Implicit in this presentation of Scrolls are at least two different eras:

Thus, an empty room need not simply be empty, but can tell a story about a bygone era through the materials used to construct it, the mundane items left behind, and the art and architecture of those who once lived there. This information adds to the weight of the players’ tactical choice of whether a room is worth exploring.

Spells once existed where creatures like dragons and giants could be controlled. Thus, the magics available to those who came before are far beyond what player characters might ever be able to accomplish. Thus, a Holmesian Dungeon itself would reflect this reality — magic was once far more powerful than it is in the present.

The Dungeon is Malleable

The primary way this reality manifests itself is through malleability.In its most basic form, this malleability is demonstrated by the ever-present threat of Wandering Monsters. There is, however, an implication that this malleability affects the physical nature of the Dungeon itself. Over time, the dungeon changes to adapt to the new realities of the adventurers that explore it.

The Dungeon itself is an NPC

In other words, the Dungeon itself acts as a semi-intelligent, malevolent creature that continually offers up the lure of powerful magic and treasure in order to entice adventurers of all stripes, hoping to lead the to their potential deaths. It is never too challenging, else why would just anyone venture into its depths? No, it offers just enough to make things interesting; however, those ever present Wandering Monsters are there to devour the unsuspecting.

Question: Is there a published Adventure Module out there that ticks all of these boxes? I do not know of one.