As someone who tries to practice what he preaches, I have started working on making The World of Greyhawk into a sandbox campaign that I would actually like to run.

A little history is needed here: Greyhawk was never really part of my D&D experience. I never ran it. I never played in it. Modules explicitly set in the Greyhawk world were stand-alone adventures or ported over to another gaming world. Most campaigns I have run have either existed within worlds I created from scratch or from one of the many Judges Guild products I have used throughout the years. As a player, in the pre-3e era, every campaign was a home-brew. When I finally did play 3.5/Pathfinder my DM used Paizo’s Golarian almost exclusively.

By the time I had an interest in doing something related to Greyhawk, it had developed such a large canon that I felt overwhelmed at the idea of ever running a campaign there. Then I got a .pdf of the first edition of The World of Greyhawk. At a mere 32 pages, it is far more akin to something Judges Guild produced back in the day. In other words, there is enough information to get you started, but it leaves a whole lot of room for you to make the world your own. It is actually really inspiring.

Know also that I have had a long time love/hate relationship with the A-series of modules (Against the Slave Lords). I own the hard cover reprint that includes A0 and have long wanted to make them work. The one time I did run them as a campaign was both a blast and a complete disaster. I would love to have them on the map of a sandbox to allow them to organically happen within context of a good campaign.

The first thing that I need to do in order to make this work for me is to radically narrow the scope of The World of Greyhawk to a map that can easily fit on a single sheet of 8.5 x 11. Given the fact that A0 is set on the shore of the Sea of Gearnat in the Kingdom of Nyrond and that the other modules in the A-series all take place in The Pomarj, here is the map I came up with: 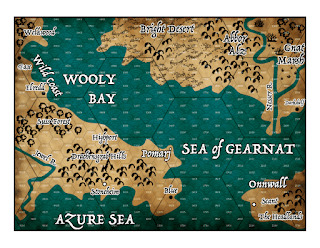 What I really like about this map is that except for a few hexes on the east side of the map, virtually everything is Wilderness. I am actually excited about this . . .