Gazetteer for My Greyhawk Campaign 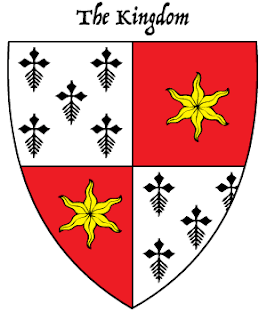 Current Leader: His Majesty King Pepin I of the House of Rax, Altmeister of All Aerdi
Major military and religious power. More concerned about eastern borders than the wilderness of the campaign map.


Notes: I changed the heraldry from suns to stars because I liked the look better than the original. I am assuming that this is the Crest of the House of Rax and a direct challenge to the legitimacy of the Great Kingdom. This rivalry explains the relative disinterest the Kingdom has in the campaign map. I chose the name Pepin after Pepin the Short, founder of the Carolingian Dynasty which would go on to found the Holy Roman Empire under Charlemagne. I want the Kingdom to have that kind of vibe. 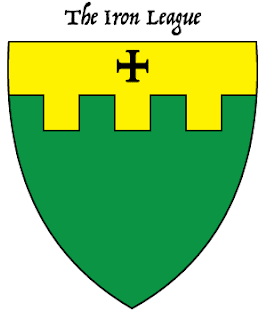 
Notes: I changed the heraldry from the knot to a cross in order to cement the major cultural difference between Civilization (represented by the Oerid, the Kingdom, and the Iron League) from the Wilderness (the rest of the map). The current seat of the Szek is in Scant, which has been relabeled as a City State. St. Nicholas is the patron saint of both sailors and merchants, so he will serve as a place holder as the Patron Saint of the Iron League until I come up with an analogue.

Disputed territory that no one bothers to control because it is resource poor. Widely known as a place of sanctuary, if a dangerous one. 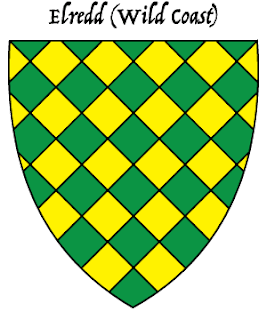 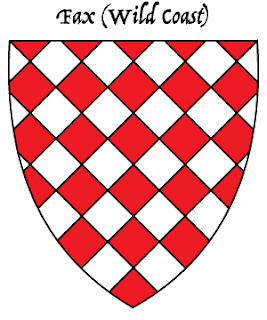 Free City of Fax
Current Leader: Mayor Rosgor the Old
While Fax does offer safe haven for most ships, it is out of the way for most trade routes; however, it is a primary destination for people who want to disappear from the rest of the world. Its residents know this and respect it.


Notes: I really like checkerboard patterns in heraldry. So, I decided that the checkerboard is to the Wild Coast as the Tricolor is to Europe. In other words, most things on the Wild Coast use a checkerboard to identify themselves, and the distinguishing feature is the difference in colors in the same way that Italy, France, Ireland, etc. all have the same flag except for the color scheme. 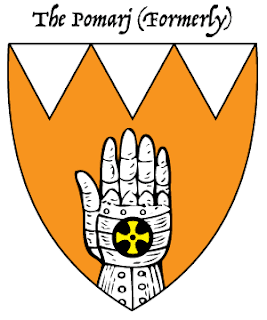 Drackensgrab Peninsula (Formerly Pomarj)
Overrun by humanoid hordes. Once one of the richest areas on the campaign map. Among survivors, except for a few aristocrats in exile, this crest is not very popular. It is a reminder of past failure, death, and loss.


Notes: The hand is one of my favorite heraldic devices. Thus, I look the creative liberty to include it on my map as the symbol for The Pomarj. It is also a nod to the fact that one of the major orc tribes in Drackensgrab is called the Leprous Hand. The cross on the gauntlet is the Cross of St. Cuthbert. 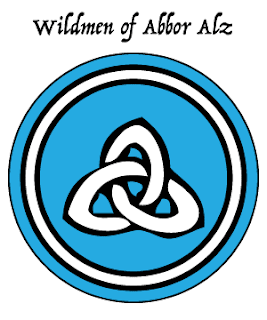 The arid hills east of the Bright Desert are controlled by nomadic, wild, and warlike tribesmen. They don’t much care for interaction with outsiders.


Notes: The crest is representative of the kinds of symbols used by various tribes. I want them to have a Pictish feel about them — they are covered from head to foot in patterned tattoos.

A major seaway for commerce and piracy.

Major storms during Spring and Fall make this a dangerous place to sail, but it is a major artery for trade, especially as the access point to the Nesser River. Raiders from the Wild Coast and the Drackensgrab Peninsula frequent these waters during the high trade months of Summer.

The original name for this body of water has been long forgotten. These waters are often foggy and telling friendly ship from foe is often difficult, thus sailors often feel as if they are woolly-headed as they sail the bay. Despite this, it is a major waterway because of the trade possibilities north of the campaign map.

Flows southward into the Gnatmarsh where it connects with the Nesser River.

About 150 miles of this winding river is navigable by large craft starting where it empties into the Azure Sea. Large sections are under control of the humanoids of the Dracuhengrab Peninsula.

This wide and deep river can be navigated by most seafaring ships with the right navigator. Thus, despite its relative remote location, is still a major waterway. River raiders are a constant problem.

Rich in valuable minerals, these hills are arid, rough, and difficult to navigate. They are also home to hostile tribesmen that are not welcoming to outsiders.

Rumored to be filled with riches and to be the location of a hidden city built by the ancient Suel, its harsh climate and native nomads turn away would-be explorers.

The southern tip of this forest is on the campaign map. It is an other-worldly place of sylvan elves and treants. Locals dare not cut trees down and only hunt with permission.

Rich in valuable minerals and the home of many terrible monsters. There are legends of a hidden resting place of one or more powerful creatures who are waiting to awaken.

These treacherous wetlands and bogs are home to a myriad of ghastly creatures and spawn clouds of biting insects in the summer months.

These form the central spine of the Onnwal Peninsula and form cliffs along the Azure Sea. Home to both dwarves and gnomes.


Note: Despite my dislike of the name, I decided to keep Onnwal as a name for the geographic area if not the country.

A dreary, hateful place full of thorn trees, brambles and thickets. Filled with an oppressive evil atmosphere. Home to all kinds of orcs. It is used at a staging area for raids on the Wild Coast. There is a rumor that there is a lost, ruined city hidden within, but few have ever dared to try and find it.

Trees here grow to unnatural sizes, with many towering to more than 100 feet. It is the home of hardy woodsman, elves, hunters, and adventurers.