Now that I have settled on the trinitarian metaphor for the Christianity/Church analogue of Artaniamism, it is time to decide on a holy symbol and therefore some of the story behind the Incarnation of the Christ figure Arta. As with Christianity, the symbol will derive from how Arta dies.

Looking at Chapter 7 of his Epistle, Mathetes challenges Diognetus:


Do you not see them exposed to wild beasts, that they may be persuaded to deny the Lord, and yet not overcome? Do you not see that the more of them are punished, the greater becomes the number of the rest? This does not seem to be the work of man: this is the power of God; these are the evidences of His manifestation.

Thus, the Artanians do not fear death by wild beast. I am willing to imagine that this is because Arta died in a similar way and yet overcame death through his resurrection.

The first idea that pops to my mind for a holy symbol would be based upon the icon of St. Iranaeus being torn apart by lions: 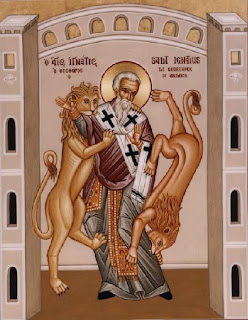 While this would make for a really interesting holy symbol, lions don’t really fit as nicely into the trinitarian metaphor of Artanianism as I would like.

Therefore, I did some searching on animals in Roman mythology and found this very interesting website.  Listed here are a bunch of animals reported my Roman writers from various parts of the world. Among them are several animals and monsters that made it into D&D:

Basilisks as presented in D&D are probably too dangerous a beast to keep in captivity unless there were an entire class of basilisk handlers that were voluntarily (or involuntarily) blinded. Regardless, using a D&D basilisk would severely limit the ability of the Empire to conduct public executions in this particular way. I wouldn’t put it past some of the aristocratic families from having such beasts for the purpose of having private executions, however.

If one goes to heraldry and how the basilisk is depicted, it appears as what we who play D&D would call a cockatrice. Now here is a beast that would be much easier to keep and use for public executions. The spectacle of such an execution could be amplified by having the cockatrice on a chained leash that could be lengthened or shortened. Thus, a victim could be toyed with as the cockatrice is kept just out of reach long enough for the victim to suffer more and to present the best “pose” for their death.

So, the holy symbol for Artanianism is the cockatrice: 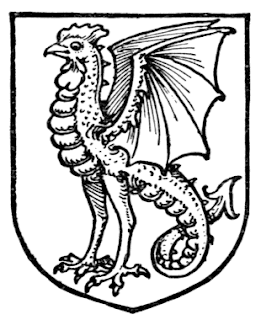