Mathetes to Diognetus: A Campaign Map

Hades as a concept is not only useful as an inspiration for the Aidisian Empire and how it functions, but it is also fodder for influencing the geography of the campaign. According to the Aeneid, the underworld had an entrance close to the volcanic Lake Avernus which is located near the city of Naples. Here is where I go really old school. The best fantasy maps are really just maps of real places that have been rescaled, turned upside down and/or relabelled.

Thus, if one takes a look at a topographical map of the area around the Lake Avernus, one finds something that looks great, is geographically realistic (because it is real) and inspires all kinds of ideas: 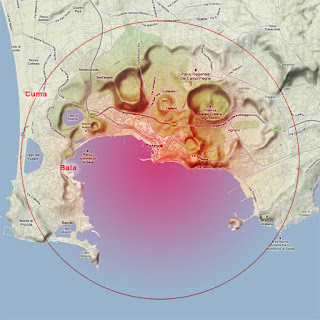 Therefore I am going to start here by changing the scale and re-labelling things.

Here is another tid bit of advice from a guy who has run a lot of games over the years and has drawn a lot of maps: practically, most of a typical fantasy campaign happens within an area approximately 20-30 square miles. There is really no real need to do any kind of serious mapping beyond that. Generally, I will have abstract ideas pencilled in like, “there is a big jungle to the south” or “the Great Kingdom is to the east” or “there are barbarians to the north.” Sometimes those notes become relevant. Most of the time, they don’t. Thus, whenever I begin a campaign, I stick to a map that is approximately 20x30 miles and it generally serves me very well throughout a campaign.

One other inspiring thing about using the concept of Hades is that it offers up a lot of names that I can port into re-labelling the map. Thus, this will be a fun place to explore for anyone who is up on their Greek and Roman mythology: 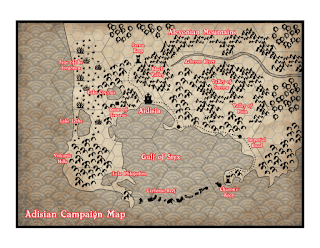