So, my brain won't let go of the idea to place those great introductory TSR modules B1, B2 and T1 all on the same map. Despite the fact that Gygax gives a very detailed description for the location of the Village of Hommlet, placing it in Greyhawk, I have no real desire to use TSR's first flagship campaign world. For one, while the location works great for T1, there really is no place to put the locations of B1 and B2 to my satisfaction. Secondly, I am far more of a Judges Guild kinda guy, and the freedom I have to mess with the Wilderlands is exactly the sorta thing one needs for a project like this.

Thus, I ended up using about 20 or so hexes from Campaign Map Two, aka Barbarian Altanis. BTW if you haven't picked up Rob Conley's colored maps of the Wilderlands, do yourself a favor and get them.

There are several reasons I chose this location:


Here is the map: 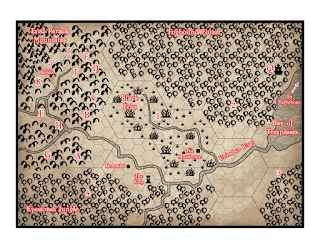 
1 = The Mound of the Lizardmen (B2)
2 = The Spider's Lair (B2)
3 = The Bandit Camp (B2): These would be a rival gang that was not willing to work for the evil cleric Lareth from the Moathouse in T1
4 = The Mad Hermit (B2)
5 = The Cave of the Unknown (B2): Meant to be utilized by a newbie DM to create their own dungeon, this Cave is intended to serve the same purpose with one twist — the Dwarves of Kolda knew of and began to explore this place before abandoning the project due to what was down there.
A = Cave A: Kobolds
B = Cave B: Orcs
C = Cave C: Orcs
D = Cave D: Goblins
E = Cave E: Ogre
F = Cave F: Hobgoblins
G = Cave G: Shunned Cavern
H = Cave H: Bugbears
I = Cave I: Minotaur
J = Cave J: Knolls
K = Cave K: Shrine of Evil Chaos
Q = Quasqueton (B1)

Labels: B1B2T1, B2 The Keep on the Borderlands, In Search of the Unknown, map, Village of Hommlet