Today is the Feast of St. Menas of Egypt. His moniker comes from his birthplace and his martyrium. His life, however, took place mostly in Phrygia (central Turkey). During the reign of Diocletian, he not only distinguished himself as a soldier, but embraced the monastic life of a Christian. When orders came to persecute Christians, he renounced his rank and withdrew to the mountains. This took place in the city of Cotyaion (modern day Kütahya).

Once, when he was passing through the city, a pagan festival was going on. St. Menas loudly condemned the fete as impious. The prefect Pyrrhus had him arrested and, when the saint refused to take up his military rank as a bribe to denounce Christ, had St. Menas tortured.

As normally happens with martyrs, he endured many vile and cruel tortures through strength given him by God. When none of these worked, Pyrrhus was forced to have the saint beheaded. This is significant, because beheading is a citizen’s death. The crime Christians were accused of was treachery. Therefore, they didn’t deserve a citizen’s death. Over and over again, however, Christians were beheaded. Thus, the very state that was persecuting and killing Christians was declaring that the crime they were accusing Christians of was false.

After his death, Christians gathered up his relics, hid them and later moved them to Alexandria, Egypt. There, his relics became famous due to the number of miracles worked through them. His martyium became a place of pilgrimage. Evidence shows that these journeys came from all over the world, even from as far away as Ireland. To this day, he is still invoked as a healer, a protector from demons and as a finder of lost objects. 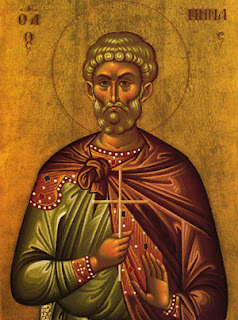 The idea of people in the ancient world traveling thousands of miles to visit a relic suggests a very interesting FRPG adventure set-up or even a campaign. There are plenty of examples of saints not allowing their relics to be moved and plenty of saints whose relics are incorrupt (thus suggesting that they cannot be destroyed). Thus, in a FRPG campaign world there could be a well known saint whose relics lie deep within (insert your favorite humanoid/monster race here) territory. The area once belonged to Civilization, but when it was overrun by monsters, the saint refused to leave and the monsters could not destroy the relics.

Today, there is still demand among the faithful to go on pilgrimage despite the dangers. Thus, an adventure could be written around the idea of a prince or other important person afflicted with a magical disease that they believe can only be cured by visiting the saint’s relics. The adventurers are hired to help with the expedition. Enterprising characters (especially clerics) could then spend a campaign rooting out the monsters so that the relics become the centerpiece of their Stronghold.