Today is the Feast of Joannicius the Great. He was born in A.D. 752 in Bithynia (in modern-day Turkey) to faithful but very poor parents. Their only wealth was some cattle, which Joanicius would tend, often using it as a means of prayer and using the Sign of the Cross to ward away both beast and thief.

When emperor Leo IV came to power in A.D. 775, he instituted a draft and Joannicius was chosen from his village to serve. He did so with bravery and earned the respect of his fellow soldiers. He was rewarded more than once by both his commanders and the emperor himself for striking fear into the hearts of his enemy. He served in the military for six years, but he knew that the life of a soldier was not his calling.

When he was able to leave the imperial army he wanted to become a hermit, but at the direction of a spiritual elder, he spent a couple of years in a monastery to learn the monastic life. He then went into the wilderness to finally become a hermit. He spent time with other monastics saints, became known as a miracle worker and finally retired to Antidiev monastery were he died at the age of 94 in A.D. 846. 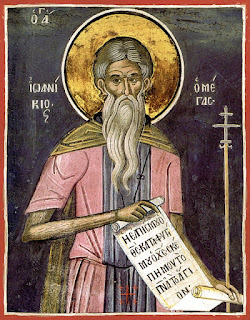 From the perspective of RPGs, I find the life of St. Joannicius fascinating because it demonstrates how grounded in reality the character creation system of Classic Traveller is, one of my favorite subsystems of any RPG in existence. Though he is famous for being a hermit, along the way he was, for lack of a better term, a cattle rancher, a soldier and a monk. If he were an RPG character, his character creation process would have gone through a couple of careers, garnered a wide variety of skills prior to becoming an adventurer (a hermit wandering the Wilderness).

The closest to this idea that I have ever seen in FRPGs is Warhammer Fantasy Roleplaying Game; however, the career changes happen as part of character advancement, not as a precursor to becoming an adventurer. A close second is the 0-level character concept that I first encountered in Goodman Games modules like DCC35A: Halls of the Minotaur. Neither of these, though, scratch the itch for a Classic Traveller-esque mini-game of character creation.

In the ACKS Players Companion there might just be a foundation upon which to build one for B/X. Therein is a section called Custom Classes which reverse engineered all the B/X classes to come up with a system to build campaign-specific classes with all variety of possibilities. A character gets a total of 4 points to spend on Hit Point Value, Fighting Value, Thieving Value, Divine Value and Arcane Value. Certain aspects of these can be traded in for special abilities which can further be expanded if they are delayed across levels.

Using these concepts, it might just be possible to create a series of tables to, like Classic Traveller, create a fantasy character, their life prior to becoming adventurer and the skills/abilities that they picked up along the way.

This is where I must disappoint. I don’t have the time or energy to put something like this together at the moment; however, I am going to bookmark this idea and come back to it at some point. Or, maybe someone else can have a go…