As can be seen by my last couple of posts, I have been rather enthralled by Swords & Wizardry Continual Light. There is something rather intoxicating about its simplicity. The amount of flexibility that the system offers isn't necessarily missing from other versions of D&D and its clones, but SWCL just makes it so darn simple to pull off.

As a consequence, I am in the middle of putting together something I've wanted to do for about a year. I did a series last November in which I imagined a world where the Monster Manual II was the only source for monsters available to Moldvay when he edited Basic D&D. Despite the fact that the MMII is my least favorite creature catalog, the thought experiment resulted in a version of D&D I really want to play.

As a consequence, I've since wanted to take the frame of a retro-clone and produce a complete rule-set of a D&D game that only uses MMII monsters. Unfortunately, said task requires too much of my time and a number of editing decisions that make the project far more complicated than I have the energy for.

Enter Swords & Wizardry Continual Light. Here is a platform that makes this vision of a MMII-only game not only possible, but extremely doable. As a consequence, I am happily editing my own version of SWCL to reflect an MMII-only world. Layout should follow closely behind and the cover is already done: 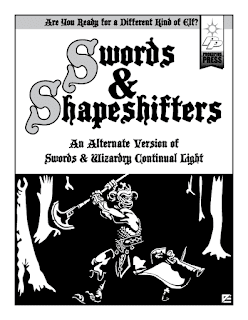 Hopefully this will get done sooner rather than later.