Today is the Feast of St. Botolph, Abbot of the Monastery Icanhoh who is a British saint from the 7th century. Born in Britain, he became a monk in Gaul. King Ethelmund of East Anglia sent his sisters to Gaul to learn the monastic discipline. There they met St. Botolph and learned that he wanted to return to Britain. Therefore, they requested that their brother bequeath some land to the monk so that he could build a monastery.

St. Botolph asked that whatever land was given to him did not come from any man’s possession so to avoid gaining from someone’s loss. Therefore, King Ethelmund granted the monk a piece of wilderness called Icanhoh. The place, according to his hagiography, was crawling with demons. Thus, before he began establishing his monastery, he had to fight with the demons and drive them all off. He spent the rest of his life in prayer becoming known for working miracles and speaking prophecy. After a bout with a painful disease in the last several years of his life, he passed in A.D. 680. HIs relics were found later to give off a sweet fragrance and to be incorrupt.

Eventually, the area around Icanhoh became settled and was known as Botolphston, which can mean both Botolph’s stone or Botolph’s town. As the years passed, the name of the place was contracted to “Boston.” 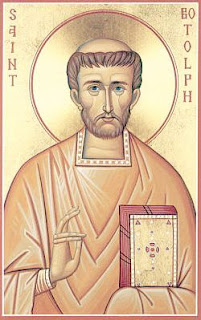 I have often pointed out the fact that the lives of the monastic saints closely resemble that of the typical D&D campaign. They come from Christian Civilization, go out into the Demonic Wilderness and tame it so that Civilization can expand; however, I don’t recall ever reading a saint’s life that so explicitly followed this formula. The hagiography literally says that Icanhoh was a desolate place where he had to fight demons. This is yet another example of why I think the formula of Christian Civilization vs. the Demonic Wilderness in D&D works so well, because it mirrors the experience of the Church Herself.

In addition, it is really cool to know that the etymology of my old stomping ground suggests that not only is Boston Bean Town but also St. Botolph’s Town. It is too bad that the only Church of St. Botolph I know of is in Boston, Lincolnshire. Boston, Mass should have something dedicated to their namesake.


This legendary +1 short sword/long knife was forged from the strange red metal recovered from a meteor. It was forged to be a holy weapon using incense as its carbon source, etched with a holy symbol and quenched in holy oil. In the hands of a Lawful character, it offers Protection from Evil 10’r when wielded. Against Chaotic creatures it is a +2 weapon and against the undead it is +3.

Its original owner was the King’s Champion Dreux who had it forged specifically to combat a demon that had began to terrorize the people in the borderlands. Unfortunately, the demon prevailed and the Red Seax became part of the demon’s growing treasure trove. As the Kingdom’s fortunes fell with the increasing influence of the demon, the king’s youngest son, Merovech, gave up his monastic training to quest after the sword. He managed to sneak into the demon’s lair and steal the sword right out from beneath the creature’s nose. He went on to use the weapon to fight against and finally rid the kingdom of the demon’s influence, although he did die from the wounds he sustained before managing to deliver the killing blow to the demon itself. In honor of his great deeds, the Red Seax remains in the prince’s tomb where it awaits to be used once again to defend the realm against evil.

For those interested, I used random tables here and here to come up with the properties and the background of the sword.