Saintly Saturday: The Venerable Barlaam the Abbot of Khutyn

The Venerable Barlaam the Abbot of Khutyn, Novgorod is an ascetic saint of the twelfth century. He grew up in an illustrious family of Novgorod, but chose the monastic tonsure early in life. He became a hermit, living in the wilderness of Khutyn outside the city. He was a strict ascetic and by the end of his life, an entire monastic community had developed around him.

Today, however, is not the Feast of the Venerable Barlaam of Khutin, that would be November 6th. Today is the Nativity of St. John the Baptist, which I have already mused upon here. In the Orthodox Church, we fast in preparation for various feasts. Right now, we are in the Apostles’ Fast getting ready for the Feast of Sts. Peter and Paul on June 29th. I chose to write about St. Barlaam because in Slavonic practice, he holds a special place of honor during times of fasting. As an exemplar of the ascetic life, he is especially called upon during times like these to pray for the strength we need to keep the fast. 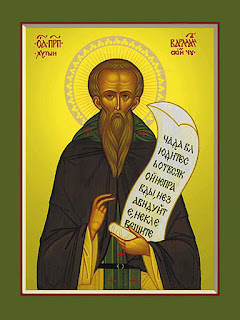 This brings up an interesting opportunity to add some background flavor to a FRPG world where fasting is a regular practice. In context of a B/X or LL game it might look something like this:

Fasting requires that a character give up 1hp per Hit Die for an adventure. In return they receive a special one-use bonus depending upon which class they are:


If the fasting in question coincides with the preparation of a major feast, the character gets two uses of the above bonus.