I got a very special surprise in the mail today. Michael Badolato was kind enough to send me the Swords & Wizardry Legion packet and it is Awesome! This thing is gorgeous and it makes me wish I were 9 years old again so that this could have been my first introduction to roleplaying. It is simple, elegant and just gorgeous to look at. You get two cards for each character class that has everything you need to know on them. It has two copies of S&W Light. It even has a small pad of graph paper. As a big fan of cartography, my favorite part is the map of The Gulf of Akados Region from Frog God Games' Lost Lands on the back of the folder. My Gamer ADD is in overdrive. This little packet is a goldmine of inspiration. Kudos to everyone involved!

I do, however, have one small complaint. Again, as a big fan of cartography, I take huge issue with the scale of the map of The Gulf of Akados Region. It declares that each hex is 50 miles! My first Lost Colonies campaign, which lasted about 3 years, took place largely in one 50 mile hex. This scale is grossly out of proportion. 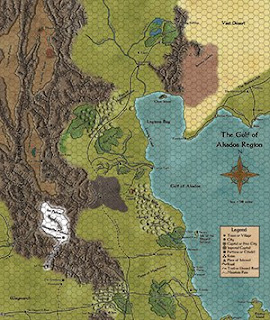 To give some sense of context, the Gulf of Akados, which takes up about a third of the map, is larger than the Mediterranean Sea. Almost half again bigger. There are several Ruins on this map, giving potential Referees all kinds of opportunity to create dungeons and adventures of their own. Unfortunately, due to the scale of the map most of these ruins are between 150-200 miles away from the nearest town or village noted on the map. Swords & Wizardry movement rules state that a character can hike their base move in miles per day. Given the average burden of a typical 1st level character, that base move is most likely going to be 9. At nine miles per day, a party of adventurers would have to travel between 17 and 23 days in order to get to the ruins marked on this map.

In other words, as is, the map is useless. Fortunately, it is rather easy to erase that ‘0’ after the ‘5’ and reduce the travel time to 2 days and the size of the Gulf of Akados to about half the size of Lake Superior.

Other than that “typo” this is an incredibly cool little package.