Talysman over at The Nine and Thirty Kingdoms has been meditating on random maps. His most recent post posited a leximorphic method that quite intrigued me. So, in a fit of Gamer ADD, I grabbed my favorite set of RPG random tables, The Tome of Adventure Design, and set about trying Talysman's method.

The Sunken Halls of the Ape Brotherhood

The name of the dungeon rolled up as The Sunken Halls of the Ape Brotherhood. This suggested several things:
I decided that each letter area would have its own feel and feature:
Here is the result of further randomness: 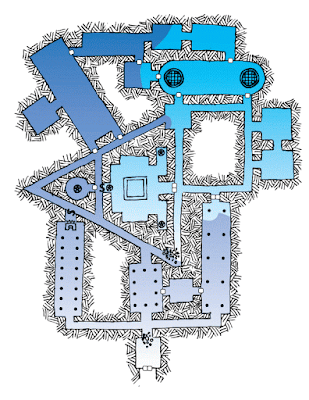