Today is the feast day of a saint with whom I feel a very deep connection, because we both came to faith in Christ from a similar place. St. Justin the Philosopher and Martyr was born in Palestine to Greek parents. He travelled the world learning the great philosophies of his age, seeking the philosophy of philosophies. After witnessing the martyrdom of some Christians, he was moved to find out about what would fill someone with so much faith, strength and resolve.

When he encountered the teaching of the Church, he found what he was looking for. He donned (or continued to don) the philosopher’s robe and became a teacher of what he understood to be the philosophy of philosophies. He would go on to write several very important works, the most famous of which are his First and Second Apologies as well as the Dialogue with Trypho. All three were written in the middle of the second century A.D. and are therefore witnesses to how the ancient Church interpreted Scripture and what the liturgy of the ancient Church looked like.

Ironically, his martyrdom came at the hands of two philosophers. He had a professional rivalry with Crescens the Cynic, who the martyr predicted would use Christianity as an excuse to have the saint killed. When this prediction came to fruition, St. Justin was turned over to the forces of Emperor Marcus Aurelius (A.D. 161-180) — a Stoic philosopher who argued that the ideal society should be lead by philosopher kings such as himself.

St. Justin was martyred in Rome. 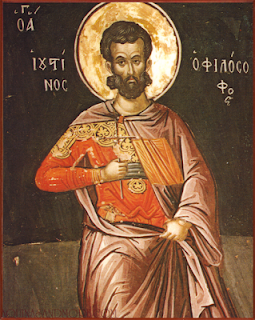 One of the arguments that St. Justin makes in his First Apology is relevant to a way of marrying the Christian world view with the Sword & Sorcery pulp roots of D&D:


For the truth shall be spoken; since of old these evil demons, effecting apparitions of themselves, both defiled women and corrupted boys, and showed such fearful sights to men, that those who did not use their reason in judging of the actions that were done, were struck with terror; and being carried away by fear, and not knowing that these were demons, they called them gods, and gave to each the name which each of the demons chose for himself.

St. Justin is playing with the Greek word δαίμων which, to the pagan mind, means god and to the Christian mind refers to fallen angels, aka demons. St. Justin later demonstrates the irony of seeing it a good thing to be an imitator of a δαίμων:


But far be such a thought concerning the gods from every well-conditioned soul, as to believe that Jupiter himself, the governor and creator of all things, was both a parricide and the son of a parricide, and that being overcome by the love of base and shameful pleasures, he came in to Ganymede and those many women whom he had violated and that his sons did like actions. But, as we said above, wicked demons perpetrated these things.

Thus, all the pagan gods one might find in a typical S&S-inspired D&D campaign are, from the view-point of St. Justin, demons. Ironically, given the history of the game and the Satanist-scare of the eighties, Supplement IV: Gods, Demi-Gods & Heroes and Deities and Demigods (especially in its original edition with the Cthuhu Mythos) actually support St. Justin’s view.

In terms of arcane vs. divine magic and clerics of various pagan cults, ACKS actually gives a very potent answer. In the ACKS Players Companion, it is possible to trade out Turning for other custom powers. Thus, it is possible to create a plethora of different classes to reflect various pagan cults with their own spell lists. For those who take issue with the idea of these various classes having effective spells, remember that the Egyptian priests from Exodus were able to duplicate some of the miracles performed through Moses. This suggests that while there is some cross-over, there are powers that should belong to Christians (or Pseudo-Christians) alone.

The easiest is the aforementioned Turning. Thus, the original cleric class gets to be what it originally was: Christian or Pseudo-Christian. It also gives homage to Holmes who stated:


All vampires, regardless of religious background, are affected by the cross which is sovereign against them.

The cool part (at least for those of us who play older rulesets) is that since ACKS is based upon B/X, any class created with ACKS Players Companion can be easily ported to any other older ruleset with little to no conversion.

Thus, one can maintain the S&S pulp feel that inspired D&D with all of its mysterious cults, magic and (to pay homage to St. Justin) δαίμων worship, while still leaving room for a Christian (or anyone else who wants to come along) to hunt down and defeat all those demons and devils.