Today is the Feast of the Prophet Amos. According to the witness of the Book of Prophecy named after him, he was a shepherd, herdsman and a dresser of fig trees from the village of Thekoue, which was about 12 miles south of Jerusalem. Though an unlearned man, his were the first of the prophecies to be written down. This is likely due to the fact that he was the first to warn Israel that God was going to lift up His protective hand due to their stubborn unrepentance.

The opening lines of the Book of Amos refer to the reigns of Uzziah and Jeroboam, kings of Judah as well as an earthquake. Josephus recorded that there was a great earthquake that took place when Uzziah was king and afflicted with leprosy. The earthquake was so significant that Zechariah wrote about it 200 years later.

All of these historical references place the time when Amos was proclaiming his prophecies from about 795 B.C. to about 754 B.C. It is probable, therefore, that he was a contemporary of Jonah, Elisha, Isaiah and Micah. At the end of his career, he went to Bethel in the Northern Kingdom (Israel split into two kingdoms after the death of King Solomon, with Judah being the Southern Kingdom). There, the priests, led by Amasias, clubbed him to death because they tired of his warnings. Less than thirty years later, the Northern Kingdom was destroyed by the Assyrians. 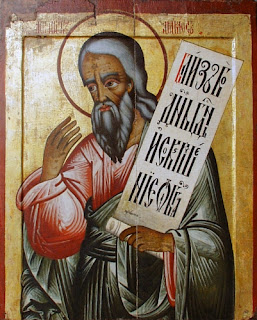 For those interested in setting up a sandbox campaign, there is a lot of really interesting information that can be mined from the nine chapters found in the Book of Amos:


For the purposes of utilizing all of this for a typical FRPG campaign, one can say that the massive earthquake mentioned in the Books of Amos and Zechariah as well as by Josephus created a massive chasm in the earth within spitting distance of the PCs base of operations (whether that be in the Northern or Southern Kingdom). Vile creatures have been pouring forth from this chasm, raiding and pillaging.

Thus, there is a source for monstrous creatures, a dungeon complex in which can be found treasure close to the PCs base of operations  and a rich political tapestry that forms a bunch of background noise that PCs can take advantage of at higher levels.

For myself, I would be tempted to dip my toe into re-imaging the Slave Pits again, especially with the new release of Against the Slave Lords due out this week with the new introductory adventure Danger at Darkshelf Quarry. A quarry can easily be re-imagined as a chasm and Edom would fill the role of the Slave Lords very nicely, especially if one of the families was delving into a market that it wanted kept secret from the other families.

For other ideas to fill out an Amos-inspired sandbox, check out some of my other posts on OT prophets here, here and here.