Depending upon the source, the feast of St. Aristobulus, Apostle of the Seventy is either celebrated today or was celebrated yesterday. The majority of sources claim March 15th, but for the sake of this post, I will cleave to the minority which cite today.

Yes. Britain. I am fond of reminding people that Britain was conquered by Rome before St. Paul ever wrote any of his Epistles and that by the time of the First Ecumenical Council, there were enough Christians in Britain that several bishops from Britain are counted among those who deliberated in Nicea. 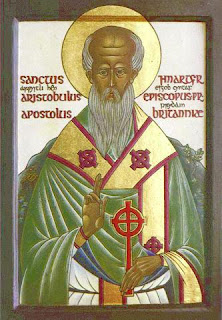 This, of course, invites a re-skinning of the classical D&D campaign where Civilization is Rome, the Wilderness is they fey-infested wild lands of northern Britain and PCs are adventurers who are daring enough to brave what lies beyond Hadrian’s Wall. There would be Romans and all the various cults associated with them, the native Britons and their cultural proclivities, the Christians mixed into the pot as well as the very rich mythology of the British Isles to mine for the various monsters that roam the wilderness. There is even the hint that there are Roman ruins that had to be abandoned after the Antonine Wall was breached and the legions had to retreat behind Hadrian’s Wall. For those interested, here is a map for inspiration (which was found here): 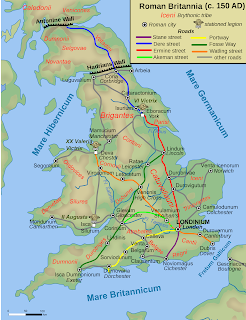