Today is the feast of St. Nicetas the Great Martyr. He was a Gothic Christian who was captured, tortured and thrown into fire by the pagan usurper Athanaric in A.D. 372. 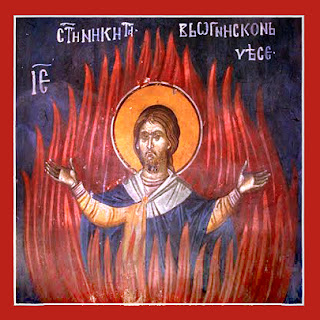 Normally, I would now go into more details about St. Nicetas’ life, however, yesterday I was struck by one of the hymns the Orthodox Church sang during the feast of The Elevation of the Venerable and Life-Giving Cross, which we are still celebrating today:


O Cross of Christ, the hope of Christians, the guide of the wayward, the haven of the storm-tossed, the victory in wartime, the security of the civilized world, for the sick a physician, for the dead resurrection, have mercy on us. [emphasis mine]

The feast commemorates St. Helen (mother of St. Constantine the first Christian Roman emperor) finding the True Cross in Jerusalem after the Edict of Milan, when Christianity was officially tolerated within the empire. When she had found three crosses lying next to each beneath a pagan temple, the bishop, St. Macarius, had a woman who was greatly ill touch the crosses. When she drew near the True Cross, she was healed.

Thus, the hymnody of the feast tacitly equates Civilization with Christian civilization. This, of course, is one of the assumptions that I make with my own use of the three-tier alignment system in D&D and its derivatives: Law = (Christian) Civilization.

The life of St. Nicetus, therefore, takes place in context of the expanding influence of Civilization in the form of the Christian Roman Empire. It also mirrors many tropes of the classic D&D sandbox campaign:


For those interested, these tropes can be found in Gygax’s classic T1: The Village of Hommlet. Additionally, take a gander at Erin Smale’s The Bastard’s Blade. He doesn’t post there very often, but what he does have fits the life of St. Nicetas very nicely (and maybe some extra traffic will inspire him to write more often…)