B.R.7 is the working name of the hive city-as-megadungeon for my WH40K campaign. Last night I started to do an intellectual exercise with some math, which demonstrates why having a hive city as a megadungeon is both an unending source of adventure as well as a mapping nightmare.

I have been using Manhattan as a reference in this intellectual exercise because it is both a finite space — an island about the size I might imagine a floating city — and it is one of the most densely populated areas in the world (about 70,000 people per sq. mile) — which suits the image of “hive city” very nicely.

The island is approximately 23 sq. miles and has a population around 1.5 million people (probably a little low, I know, but for easy math purposes 1.5 is a lot easier to deal with than 1.602). In order to fulfill the notion of a hive city, there needs to be, at minimum, 1 billion people. Thus, at least seven seven hundred Manhattans have to be stacked on top of each other in order to approximate a hive city environment. Ignoring for a moment that the island is covered in towering skyscrapers and multi-level apartment buildings, seven seven hundred Manhattans would have around 161 16,100 sq. miles.

Herein is the beauty and the horror of the hive city megadungeon. If one considers that (as far as I can tell) AEG’s World’s Largest Dungeon covers about one third of one square mile, mapping a hive city would require at minimum 483 48,300 world’s largest dungeons. This, of course ignores the fact that Manhattan has an average story height that might approach 20-30.

As much as I love maps and making maps, the idea of mapping 5000+ 500,000+ different versions the World’s Largest Dungeon is not something I want to do (or can do). This means that I must severely reduce access to the hive city itself. This way, I can reduce the amount of actual mapping that needs to be done and allow for expansion as I need or want it. In order to do this, I have in mind the cover of GDW’s Journal of the Traveller’s Aid Society #15: 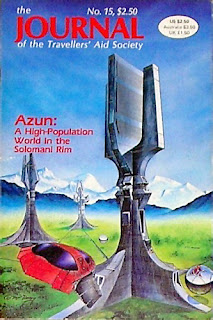 The giant skyscrapers represent the mega-cities of the high population world Azun in my favorite part of Third Imperium space: The Solomani Rim. (Since I am having a hard time finding my copy of this, I am having to go on memory) Azun is xenophobic. Each of the cities is self-contained and even communication between mega-cities is limited. Thus, access to each mega-city is extremely limited.

While this scenario works, Black Reach is not xenophobic; however, it does have a Thick Atmosphere and an Immiscible Biosphere. Thus, each hive city can have a controlled environment that seals itself off from the environment outside. This set-up would allow for a limited number of access points into the city and make my job much easier from the outset.