Today I am going to hop into my Way Back Machine and end up in 1985 when I waisted more hours than I’d like to count playing The Bard’s Tale on my Commodore 64. While I am tempted to wax poetic about how much better it was than Wizardry (which also ate up a bunch of my time), how it owes a tremendous debt to D&D or how it emphasized exploration over story, these are not my primary reasons for reminiscing about one of my favorite computer games of my youth. 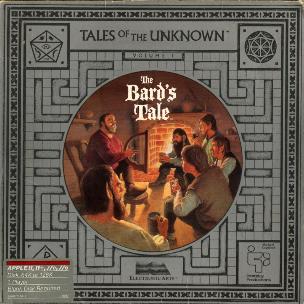 Rather, I bring it up as a starting point for what a Holmesian assassin might look like — one of the subclasses that Holmes hinted would be part of AD&D:


There are a number of other character types which are detailed in ADVANCED DUNGEONS & DRAGONS. There are sub-classes of the four basic classes. They are: paladins and rangers (fighting men), illusionists and witches (magic-users), monks and druids (clerics), and assassins (thieves).

The Bard’s Tale, being (in essence) a D&D clone for the computer included several character classes which strongly resembled their D&D progenitors. Among these was the Hunter, which was described thusly:


An assassin, a mercenary, a ninja. The hunter can use most weapons, and has the ability (which grows with experience) to do critical hits in combat (i.e., to attack a nerve center or other vital area and instantly kill an opponent). A good skill.

Given that there really isn’t any kind of implied definition of what an assassin might be in either Holmes or Cook, it seems to me that this is as good a definition as any (especially since this thought experiment is about what my version of D&D might have looked like and The Bard’s Tale was definitely part of my gaming experience). The question then is what mechanic to use for the assassin’s critical hit ability.

Two suggest themselves from the rules of Holmes & Cook:
Whereas I think being able to instantly kill a dragon would be cool, it is only cool if it doesn’t happen frequently. Thus, I believe a combination of the two mechanics could be used. It would work as follows:
For example: an 8th level assassin (THAC0 17) successfully hits a red dragon (AC 2, HD 9) with a ’19’. She needed a ’15,’ so the base percentage for a critical hit is 4%. This is increased to 32% ([4 x 7] + 4) due to her level. Should she succeed in landing a critical hit, the red dragon would then need to roll a ‘6’ or higher on their save vs. death in order to avoid being instantly killed. I’m no math wizard, but I think that comes out to be about an 8% chance of the assassin instantly killing the dragon. Overall, an 8th level assassin has about a 2% chance per attack to instantly kill a red dragon. That feels about right.