Today is the feast of St. Nicodemus of the Holy Mountain. Born Nicholas Kallivourtzis in Naxos, Greece around 1749, he went to Mt. Athos to become a monk at the Dionysiou Monastery in 1775. While he was part of a group of monks that revived hesychasm (a mystical prayer practice which uses the Jesus Prayer — “Lord Jesus Christ, Son of God, have mercy on me the sinner”), he is far more famous for his literary efforts.

In 1777, St. Makarius of Corinth gave him three texts to edit and revise. Among these was the Philokalia, a book of huge spiritual import of which I have mediated on before. St. Nicodemus would also go on to edit On Frequent Holy Communion and the Evergenitos, write hagiographies and liturgical poetry and translate several Western Christian works, especially from the Jesuit tradition.

Ironically, St. Nicodemus is far more popular in Orthodox lands outside of his native Greece — particularly in Russia where the Philokalia has had a much deeper influence. Due to “Western Influences” (his interest in Roman Catholic writings) he is still approached with some trepidation. Personally, I find this unfortunate because his contributions are manifold. 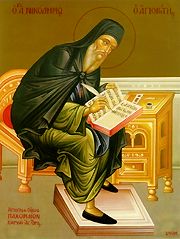 It occurs to me that there are various tables available to come up with random book titles, but most have to do with historical or arcane subject matter. Since St. Nicodemus was such a prolific writer, editor and translator, I thought it appropriate to come up with a table to produce book titles for religious works.

This table has three parts. One can use their funky new d16 (if you happen to be a DCC aficionado) or one can roll two d4s and read them as one might a pair of percentile dice. One d4 is the tens place, the other the ones place. This should nicely produce sixteen possible results.

Thus, if one rolled 14, 23 and 31 the title of the book produced would be: The Poetry of the Virgin Lioba. I tried to use a bunch of names that could pass as either masculine or feminine, but it is entirely acceptable to render a name one way or the other if it seems necessary.