As I noted in my last post, I have been traveling a lot lately, mostly by car. In order to pass the time in an entertaining way (particularly for the kids) we’ve been listening to the Star Wars Radio Drama. I don’t remember when I purchased this set of good ‘ol fashioned CDs, but I haven’t listened to them for years…and had forgotten just how good they are. 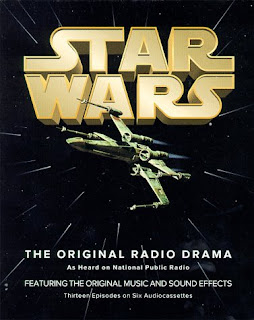 Let me just say, before I go any further, that I acknowledge the fact that George Lucas has every right to fiddle as much as he wants to with his movies (since he created them, owns them, etc.). I also reserve my own right to say that much of that fiddling has curbed my enthusiasm for the franchise (I haven’t actually sat through an entire movie — even my old VHS copies of the original versions — in almost a decade).

I also reserve my right to throw my hat into the ring as a Han-Shot-First kinda guy. Personally, in context of the story, it not only makes sense, but I always thought it essential to the story arc of his character. His decision to turn around and join the Battle of Yavin at the last moment has more meaning.

The story arc is even stronger in the thirteen episode radio play (almost 6 hours) where so much of the story is driven by what the characters say (audio) vs. what they do (visual). Han is much more of a shady and untrustworthy character at the outset than he is in the movie (even before George started fiddling). Obi-wan does make few interesting observations that set the stage for both Luke and Princess Leia having conversations with Han on Yavin trying to convince him to fight.

And in that moment when Han does show up at the end to allow Luke enough time to fire off his shot to destroy the Death Star, I got just as many goose bumps as I did in the movie theatre, despite knowing how everything ends and despite not having all those fantastic visuals.

There are several things going in the Radio Drama’s favor.


Therefore, if (like me) you prefer Han shooting first, then take a listen. I know I will be going back to the Radio Drama a lot sooner and a lot more often than I will the movie.