Let me begin today’s post with a personal story. Several years ago, I visited Thessaloniki. When I first arrived, I was stunned by how ugly the city is. Block concrete buildings dominate every street corner and every skyline. Graffiti is everywhere and any attempt to clean it only results in new graffiti.

Part of the shock was due to the fact that the city is littered with byzantine churches, relics and scriptural provenance. It was with a great sense of irony that one not only could not see most of the churches from a distance (they were surrounded by these towering blocks of concrete), but one had to descend beneath street level in order to enter.

All of this ugliness and seeming disregard for the holiness that is literally at ones finger tips in every section of the city angered me. I was due to stay for a number of weeks and was in no mood to have to witness this physical edifice that seemed to prefer the straight, grey concrete lines of 20th century secularism over the complex beauty of ancient Christianity.

Part of my own journey to Christianity, however, was a retreat from the self-destructive anger of a cynical youth. Anger requires so much energy and so much time — neither of which I have any desire to spend wasting on things over which I have no control. Therefore, I spent most of my time in Thessaloniki searching for beauty. I found it by ignoring the skyline and focusing on the intimate and the small.

One of the things that helped with this revelation was a small icon of stunning beauty I found in the street market: 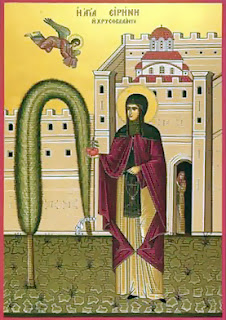 At the time I had no idea who this women was, why the tree was bent over or why she held three apples, but I was bound and determined to find out. Her name is Irene the Righteous of Chrysovalantou and today is her feast.

Irene lived during the ninth century and was originally from Cappadocia. She was chosen to be betrothed to the Emperor Michael (whose mother St. Theodora ended the period of Iconoclasm by restoring the icons to the churches). On her journey to Constantinople, however, she was told by St. Ioannicius that she was needed at the monastery of Chrysovalantou.

She therefore proceeded to meet the Emperor with great trepidation, knowing she would have to reject the betrothal; however, (with great relief) she found that Michael was already married when she arrived. Therefore, she spent the rest of her life as a monastic at Chrysovalantou where she eventually became abbess.

The bent tree comes from an account of one of the nuns from the monastery. St. Irene had the practice of keeping an all-night vigil in the courtyard throughout the night of the Great Feasts of the Church. The nun, unable to sleep, witnessed St. Irene floating in air with the cypress trees in the courtyard bowing to her. When she was done with her prayers she blessed each tree in turn and they went back to their original position.

The apples come from an account of a sailor of Patmos (where St. John the Evangelist lived out the end of his life). As the sailor set sail, he saw an elderly man on the shore telling him to stop — which the boat did despite the wind and the current. The man then walked across the water and gave the sailor the apples with the instruction to give them to St. Irene with the message that they were a gift and came from John in Paradise. There are parishes that to this day bless apples on this feast.


These rare fruits reportedly come from the trees of the Garden of Eden. They are immune to decay and will remain fresh and unbruised until they are consumed. Each fruit has 1d6+1 bites before it is consumed. Taking one or more bites from the fruit will confer to the recipient any healing spell from the Cleric Spell List. Higher level spells, however, require one bite per level of the spell. For example, a Cure Light Wounds spell requires one bite and a Neutralize Poison spell requires four bites.