A Different Kind of Megadungeon

Awhile ago, Staples of Grognardling began blogging about his efforts to create a megadungeon based upon various philosophies within the OSR. One of his inspirations was one of my own maps: 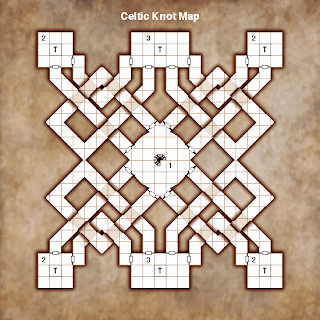 His own efforts got me thinking about a way that I could turn my own experimental map into a megadungeon. Step one in this thought process was to replace each room in the map with an entire dungeon area. Step two was to completely re-tool that marvelous old-school trope of the endless stair. The result has been a multi-level megadungeon with hundreds of encounter areas that for all intents and purposes uses only one map for each and every level.

First, a little background: as I've stated before, one of my all-time favorite modules is T1 The Village of Hommlet; however, one of my biggest disappointments was T1-4 The Temple of Elemental Evil. I have always wanted to do my own version of the Temple, but have never been satisfied with the several aborted beginnings I've made over the years. Thus, when I started musing about doing a megadungeon based upon my experimental map, I immediately began musing about a potential TEE redux.

Thus, the top level of this dungeon is the Temple as found in T1-4. Immediately beneath are catacombs, roughly in the form of an eight pointed star. This corresponds to the central room in my experimental map above. Each"point" in the star has a pair of locked double doors. These doors lead to dungeon areas inspired by the alchemical signs for Sun, Moon, Air, Earth, Fire and Water (and each corresponds with a different room in my experimental map). The Sun and Moon have two sets of doors leading to them and the others have one each.

Every area has a pair of teleportation rooms (just as each room does in the map above). One of the teleportation rooms in the Air, Earth, Fire and Water regions teleport the party to an identical dungeon located somewhere else (either on the same campaign world or potentially a different prime material plane). The other (requiring a key) will teleport the party outside the dungeon to a given spot (thus, mimicking the endless stair concept).

One of the teleportation rooms in the Sun and Moon regions requires four different keys (one for each of the four elements) to operate. It will teleport the party to a section of the dungeon inaccessible any other way. Within this inaccessible area is a teleportation room that will send the party to some fantastic place (such as a space station orbiting the sun or a moon base).

There are effectively four levels to this megadungeon (with each "level" existing in completely different places). Each one is dominated by a sect with the TEE cult dedicated to one of the elements. Only one of these levels (and thus, only one sect) was decimated by the forces of good that "destroyed" the Temple. These sects are bitter rivals, made only worse by the decimation of one of the sects. Each is trying to find their way into the inaccessible areas of the dungeons in order to gain access to the fantastic "magic" available to those who find themselves orbiting the sun or on the surface of the moon. Ironically, their rivalry is preventing any one of them from succeeding (because they need the keys from each of the sects).

I am very interested to see how this plays out. Map-making will be critical, because once one level is mapped out, the whole dungeon is mapped out giving the party the opportunity to carefully plan their expeditions.

Here is the rough draft of the map that I came up with for this concept. Enjoy: