St. Theophanes the Confessor was an 8th-9th century monk who had once been married and been an imperial bodyguard. He died on the island of Samothrace. The title Confessor is given to saints who are imprisoned, tortured and/or sent into exile for the faith but are not martyred. St. Theophanes earned this title because he was exiled to Samothrace by the emperor Leo the Armenian.
The issue that caused this exile might seem trivial and strange — icons. 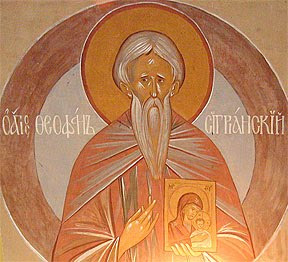 St. Theophanes was one of the defenders of the use of iconography by the Church. Leo the Armenian was an iconoclast (literally, a breaker of the icons). It is kind of amazing to think that a piece of wood with a painting on it could cause a bloody conflict that would last from 730 to 843.

The reason that iconoclasm became such a large controversy was because it became an issue over the nature of Christ. The iconoclasts not only argued that icons were idols and therefore banned according to the 10 commandments, but that mere wood and paint were not worthy of depicting the beauty, holiness and glory of Christ and His saints.

The iconodules (literally, lovers of icons) argued that if creation, in the form of wood and paint, were evil enough that they were incapable of depicting Christ and His saints, then it follows that iconoclasm calls into question the incarnation of Christ. By refusing the ability of Christians to depict the reality of God Incarnate who walked the earth, interacted with His creation, ate, drank and was touched, heard, and seen because wood and paint are not worthy of His image, they imply that the humanity — which is as much part of creation as wood and paint — is also not worthy of being united with Christ. If we cannot depict Christ, we cannot definitively defend the incarnation.

The first Sunday of Lent in the Orthodox Church is the celebration of the return of the icons to the Churches. On this day the Gospel Reading is from the end of the first chapter of John. The last verse (51) is actually a difficult thing to translate. Usually, it is translated thusly:

Truly, truly, I say to you, you will see heaven opened, and the angels of God ascending and descending upon the Son of man.

Here is a more literal translation:

Truly, truly I say to you: you will see heaven — the one that has opened — and the angels of God — the ones ascending and descending upon the Son of Man.

These items appear to be normal paintings on wood varying in size from about an inch a side to a couple of feet a side; however, when used in prayer to ask the saint depicted for intercession, the icons will reveal their miraculous nature. There are several types, roll a d12: