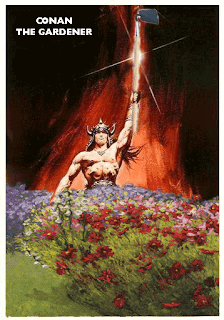 Well, not really; however the name is close enough (Konon/Κόνων) that I just couldn't resist.
St. Konon the Gardener was a simple man from Nazareth who lived in the reign of emperor Decius. He is known as the Gardener because of the one he tended in the region of Pamphylia. He was so kind hearted that he greeted the soldiers who had come to arrest him with all his heart. When told that the governor wanted to see him, he replied:

What does the governor need of me, since I am a Christian? Let him call those who think the way he does and have the same religion with him.

He was martyred when he refused to sacrifice to the idols.

The Spade of St. Konon

This appears to be a normal soldier's spade and may be used as either a digging tool or a weapon; however, its miraculous character does not become apparent until someone with a STR of 8 or less attempts to use it to turn the earth. For every negative STR penalty that the character has using the spade, it will produce enough food to feed one person for one day (STR 3 = 3 people; 4-5= 2 people 6-8 = 1 person). This power is usable once per day.