Today is the feast of St. John the Cave Dweller and tomorrow is an interesting feast — the Veneration of St. Peter's Precious Chains. St. John was a hermit from Constantinople who forsook his parent's wealth to become a monk. The chains are those worn by Peter when he was freed from jail by an angel (Acts 12:1-19). What I found inspiring about St. John was the imagery found in the following hymn:

Denying the world and the things thereof, O righteous Father, you took hold of the Gospel and followed it in accordance with the Gospel's precepts. Living in your cave as it were mystically in Paradise, you slew the man-slaying dragon by your hard life of privation of all fleshly comfort. Wherefore, as you dwell now in the Heavens, O blessed John, pray that we be granted great mercy.

In a fantasy setting where sin is personified, an analogue for St. John slays an actual dragon and St. Peter's Chains can become a magic relic. Thus inspired, I came up with the following:

The Cave of St. Ion 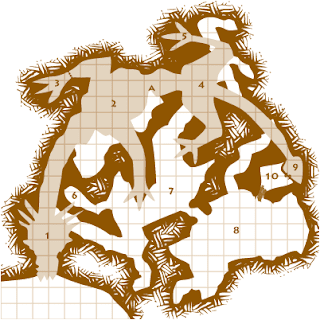 This map is meant to be either placed in the wilderness or in a remote part of a dungeon. It was once the dwelling place for the hermit St. Ion. At one time this was a place of pilgrimage, but has long since been forgotten and lost.