I have a bit of a confession to make. I have never played in a Greyhawk campaign. In fact, it wasn't until well into the 90s that I even read any material about the Greyhawk campaign world. Certainly, I have played with modules written for Greyhawk, but they either were one-offs or removed from their original background in order to be reset into our home-brew campaign worlds.
Recently, I have come to really enjoy much of the research done by folks in the OSR about Greyhawk, Castle Greyhawk, etc. However, this hasn't affected the fact that I have never really had any desire to play in a Greyhawk Campaign or to go explore the Mad Archmage's Castle. Personally, I am more of a Judges Guild type of guy, because it has always seemed to me that the Wilderlands invited and encouraged a DIY attitude, whereas Greyhawk always felt like someone else's property. In fact, all of the attempts at finding a mythically historic version of Castle Greyhawk demonstrates that I am not the only one who feels this way.

Something funny happened on the way to the gaming table, however. After playing Labyrinth Lord for a year and a half while listening to me wax poetic about the old days of the hobby, some of my players have gone out and found old copies of modules, maps and rules. Not only that, but they have voiced a real desire to play them. As a result, I am faced with the very real possibility of running my very first Greyhawk campaign whether I like it or not.

To that end, I have been doing some thinking about how I could make a campaign set in Greyhawk interesting for me to play as a Referee. In other words, give it the same kind of treatment I feel entirely justified doing to my own version of the Wilderlands.

Greyhawk 1st edition only. I don't much care for the later editions because they go into too much fiddly stuff and take the world in a direction I am not much interested in. The 1st edition is wonderfully short on detail, but overflowing with things that inspire. In other words, I can much more easily tailor the world to my liking and still stay true to the original material.

As far as maps go, I plan on using only this: 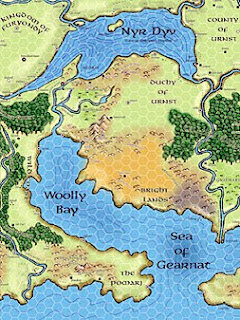 As much as it pains me to ignore so much of a beautiful map, limiting the campaign area greatly reduces the amount of information I have to process and be responsible for. It also places the Free City of Greyhawk in a backwater at the edge of the wilderness instead of being smack-dab in the middle of civilization. This allows me to have much greater freedom in representing what is off map. The corrupt Great Kingdom and the mysterious Scarlet Brotherhood can exert a much greater influence on the region because the geography need no longer get in the way.

Due to the reality that I don't want to spend an extraordinary amount of time on this project, I don't plan on using much in the way of home-brew adventures. In addition, this whole effort comes out of my players' desire to play through some of the original modules (specifically A1-A4). Thus, I plan to lean heavily on this material. Of course, one glaring hole in this plan is Castle Greyhawk. Though there are plenty of resources out there to emulate what the famous castle may have been, I'm not particularly interested.

I plan on taking a very different tack. The Mad Archmage will still be part of the world. He still built Castle Greyhawk only to disappear, and his influence can be felt far and wide, but the reasons the ruins of his castle are a magnet for adventuring types has very little to do with his original creation. Rather, at the height of the corrupt power of the Great Kingdom, the Overking used the ruins of Castle Greyhawk as a prison. While there are some who remember its original name and its original purpose, most now know Castle Greyhawk as Stonehell.

For reasons that will become obvious, I would use Labyrinth Lord as my ruleset. Not only because I have become a big fan, but also because I want to take full advantage of LL's modularity. This will be specifically manifest in the available character classes and races:


I have become a big fan of race-as-class. I didn't use to be until I started playing with it. I have come to really appreciate how it mechanically expresses the alienness of the non-human races. This has a way of sneaking into the way my players play them. I have become particularly interested in seeing how Elves from the OEC play.

Gnomes, Half-Elves and Half-orcs don't come with a race-as-class, however. Since the latter two are half-human, this can simply be explained by their humanness. Given this explanation, Gnomes can be understood as Dwarves who have come under undue influence of humans (dare I credit the Mad Archmage with creating a kind of Half-Dwarf?).

Magic Users begin with the LL core rules because I want to differentiate between the LL and AEC spell lists. The former will be more common spells, with the latter being much more rare, expensive to get a hold of and difficult to find.

Replicants are the result of one of the many bizarre experiments made by the Mad Archmage. Little is known as to who the original human being was that became the template for an entire race. Over time, however, as the Replicants continue to procreate, their ability to produce exact copies has deteriorated to the point where strange mutations have been popping up in recent generations. The closer one gets to the original, the more stable and mutation free one gets. Of note, though, Replicants have became fashionable bodyguards and soldiers among the elite within The Free City. Given the overall same-ness of the Replicants, they have a tendency to use tattoos as a means to express their individuality. Often, this takes the form of some kind of symbol tattooed on the face — this makes for easy identification.

Shape of the Campaign

The Free City has an economy entirely based around mercenaries and adventurers. It functions as the place where civilization and the Wild Coast meet to do business. The city works very hard at making an environment where outside feuds and conflicts are not welcome — they are bad for business. As a result, several mercenary companies have their headquarters inside the city and those interested in hiring them travel from all over the world to do business. This has resulted in a thriving economy based on accommodating nobility, merchants and travelers of all kinds.

Stonehell/Castle Greyhawk functions as a proving ground. Individuals who wish to join a mercenary company, adventuring guild or attract a patron are encouraged/expected to venture into the dungeon in order to demonstrate their worth. As a result, there is little interest in clearing out the dungeon or in finding out why it seems to be in constant flux and perpetually full of monsters. In fact, having it continually fester is good for business.

Slavery and the slave trade will be part of the background noise. While there is no slave market in the Free City, many of those who do business there own slaves.

Thus the basic trajectory of the campaign might very well be the party spending time in Stonehell in order to gain enough notoriety to gain a patron. Available patrons would be those that aggressively oppose slavery or have had family members kidnapped by slavers. The party will then be sent on a mission which will result in pulling out A1-A4.

The one thing that I do truly appreciate about the Greyhawk world is the Scarlett Brotherhood. Any group that has racial supremacy as a central tenet makes for great villains. Nationalism is so very seductive and sexy. It also has the tendency to corrupt and turn very ugly. Thus, those who adhere to it can justify all kinds of heinous acts because they are the hero of their own story. In other words, every member of the Scarlett Brotherhood has a very real motivation that makes for great villainy. There is no doubt that I will take full advantage of this.