Today is the feast of St. George the Chezobite. He was a Cypriote by birth who lived at the beginning of the ninth century. When his parents died when he was young, he travelled to the Holy Land and became a monk. He was an extreme ascetic. He would go days without food and would stand in prayer for hours. One of the more interesting stories about him involves a fellow monk who struck St. George in anger. The offending hand immediately shriveled into a useless stump. After begging for forgiveness, the hand was healed.

As fantastic as this story may be, it is not the most inspiring aspect of St. George's life. From the perspective of an RPG, the most significant part of St. George's story is the monastery he joined and eventually became the abbot of — Hozeva, which was built inside a huge ravine between Jericho and Jerusalem: 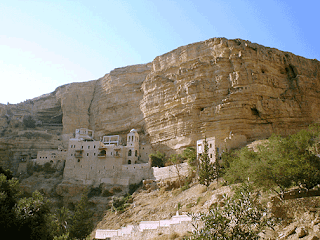 It is places like these that reminds me that I don't need to look much farther than the real world to find some truly fantastic places to use for location based adventures. Beautiful, isn't it?