In the wake of the news that Frank Frazetta has died, I found myself surfing the web in search of his work. In some sense, I was trying to remind myself in what way his work has had influence on my life, my person and my gaming. I was very quickly reminded that overall, I have never been much of a fan. When gazing upon one of his paintings, there is often something in the back of my head that tells me I shouldn't be looking at this. His style has always struck me as too visceral.
Let me try to demonstrate what I mean. First, take a look at these two depictions of the crucifixion: 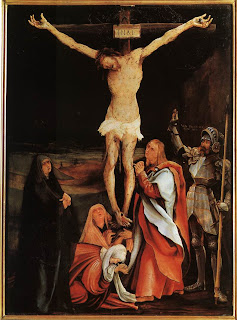 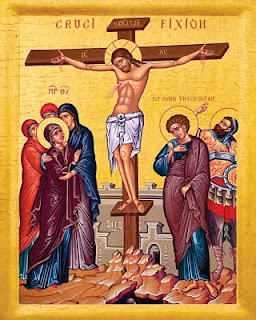 Note how visceral and realistic the first is — even grotesque, especially when compared to the stylization of the second. The first, while being able to capture the utter human tragedy of the crucifixion, fails at capturing what St. John calls Christ's glorification. The second, while not nearly as realistic, manages to capture both the human tragedy and the glory. In the end, I have a hard time looking at the first, whereas I love to gaze upon the second.
I feel much the same way about Frazetta's work. Take a look at what is probably my favorite Frazetta painting (Death Dealer) as well as one of my favorite pieces by one of my favorite fantasy artists, Erol Otis: 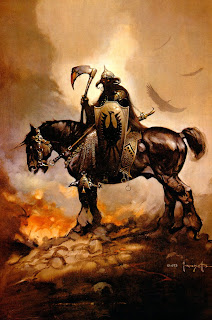 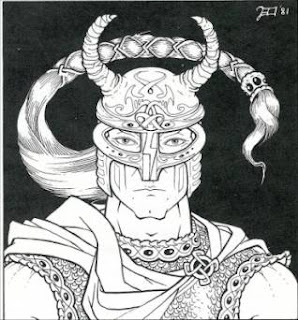 For much the same reasons above, I love to look at Otis' piece and have a hard time looking at Frazetta's. Although Otis' style is highly unrealistic, it evokes a sense of heroism even in the face of tragedy and death (see his covers for Moldvay's Basic Edition and the new Hackmaster Basic).
This is where I must insert a very big however. Although I am not a big fan, I must give credit where credit is due and must admit that Frazetta has indeed affected my life, my person and my gaming. Death Dealer forces me to come face to face with evil. There is nothing at all heroic about Death Dealer — he is violence incarnate. The fact that he is faceless reminds us that he dwells within each of us. He is a mirror that reveals that evil must be laid at the foot of humanity. We have brought it into the world and we keep it alive everyday by the choices we make. Indeed, the most frightening monsters in the world and in fantasy are not dragons, demons, or even the mind-shattering horrors of HPL's imaginations. The most horrifying monsters are humans.
In his own way, Frazetta helped me see and understand this reality and set me on a path to seek an answer to evil in the world — to seek out the heroism in Otis' work and the glory of God in the icon of the crucifixion. To that end: thanks Frank. You will be missed.