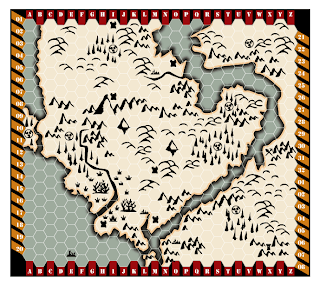 In deciding on how the surface world should look, I did allow the underworld to guide me in two ways. Firstly, I made the assumption that anywhere there was a quarry in the underworld, there would be a mountain range above. Secondly, there would be a valley or depression anywhere a "Special" was below (assuming that these had impacted the surface in ancient times, leaving behind a geographic fingerprints): 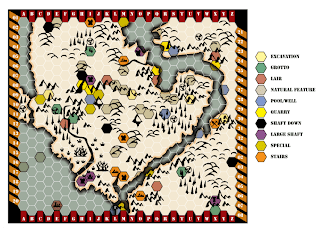 Forests can only exist where there is water, so there had to be either a river or a spring; however, I didn't want to have very many rivers (to emphasize importance of springs and wells). Thus, I only included two.

I placed springs roughly based upon where they exist in Anglesey.

Floating mountains are wandering monster encounters — they ride the wind patterns and are constantly moving. Some follow more erratic patterns than others. The two floating mountains on the map are the only two that are stationary. One has been chained down in order to mine it, the other is stationary due to some unknown reason (note that it lies between to "specials" in the underworld beneath).

I determined what lay above each dungeon in a random manner. There were four possibilities:
The monsters listed at these locations in brackets indicate the main occupant or the "master" of the dungeon beneath.

This area is known by several names:
Elves and dwarves are known as ylfe and duergar. Both races are descended from Nephilim. As such, there is no distinction between "wood" and "dark" elves or "mountain" and "grey" dwarves. Neither are particularly trustworthy or happy about humans being on the island.

The current wave of humans are Afonites (followers of Afon(eos) and the revelation of God as Triad). They originally lived east of the island in the most north-western part of a world-spanning Afonite Empire. A massive invasion by pagan barbarians and humanoids collapsed the western half of the Empire, cutting off the colonies of the north-west. In the face of the invaders, the Afonites fled west, finally arriving at the island. They had nowhere else to flee and things looked bleak; however, following the martyrdom of the Four Martyrs and the miracles surrounding their death, the Afonites pushed the invaders off the island under the leadership of St. Morol.