Maze of the Minotaur

Recently (inspired by Dyson at A Character for Every Game), I've been experimenting with geomorphs. I remember seeing them in my hobby store as a kid, but never bought them nor ever used them in all the years that I've played RPGs. Until now, I've never had much use for them. It wasn't until I embraced the model of building dungeons expressed by Moldvay and modeled in B1 In Search of the Unknown that I have grown to have any appreciation for them.

For those who do not fully embrace the Moldvay/B1 style, I do have a wonderfully nasty way to use them as a large encounter area to be dropped into your favorite megadungeon or even as a stand alone adventure. In an homage to the Greek myth, I call it the Maze of the Minotaur.

At its most basic, it uses 10 geomorphs (though one could expand it if one wanted to be really nasty). At the center of the maze, represented by one geomorph, is the actual minotaur lair. Of the remaining geomorphs, eight are arranged around the lair so that a 3x3 grid is created: 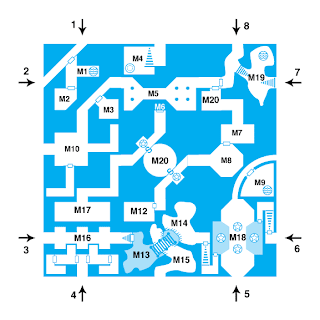 Anytime any character sets foot in the area of any part of a new geomorph, one turn later, the maze will shift. In a 3x3 grid, where the center geomorph never moves, there are eight possible ways for the maze to shift. Thus, a simple roll of a d8 can be used to determine the direction of the next shift. This is where the leftover geomorph comes into play. The new tile will shift one column or row of the maze, pushing one geomorph off the map. In the following example, a '1' is rolled to see which direction the maze shifts: 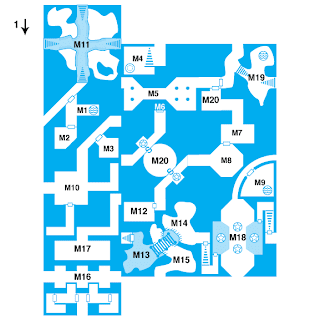 There are two exceptions to this, however. As mentioned above, the Minotaur's lair never shifts, so the center column and row are never moved. In addition, if a column or row is shifted one direction, it cannot be shifted in the opposite direction the very next time the maze shifts (and thus restoring the maze to its previous formation). Using the example above, the next time the maze shifts, any roll of '4' needs to be re-rolled: 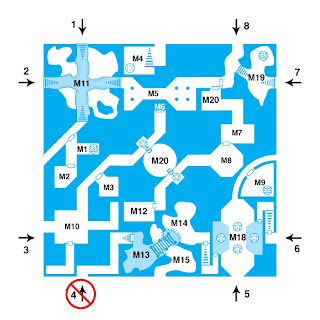 There are two additional rules necessary for the maze to function to prevent parties from being trapped forever inside the maze (or until the next group of adventurers shows up to shift the maze):
If anyone happens to use this concept in play, I'd like to hear how it goes.