The Rise of the Antmen

Compare yourself with the ant, O sluggard, and be zealous when you see his ways, and become wiser than he. — Proverbs 6:7 (LXX) 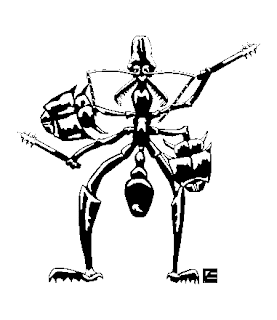 Myrmixians are an ant-like bipedal species with four arms. As indicated by their ability to make and use tools, they do display signs of sentience and intelligence, but both are quite alien to humans. Technically speaking, they are Lawful creatures; however, their idea of 'civilization' tends to be in conflict with both Lawful and Chaotic creatures. Thus, they are listed as having a Neutral alignment.

In combat, Myrmixian soldiers wield two shields made out of the heads of giant ants. They are quite adept at using both at the same time and improve their base AC of 2 to an AC of 0 when thus armored. Each shield may be sacrificed to negate a single hit against them (for a total of two hits). In addition, each shield is armed with a stinger filled with a paralytic poison excreted from Myrmixian pupa. A successful attack with the stinger also destroys the shield. Those who make a successful save vs. poison will still suffer a -2 to all rolls. The effects of the poison (whether full paralysis or the -2 penalty) will wear off after 1d6 turns.

Myrmixians come in a variety of colors, but recognize each other by scent. Thus, in a conflict between Myrmixian hives, it can be very difficult for non-Myrmixians to distinguish sides.

All Myrmixian hives will also be inhabited by Giant Ants which have been domesticated for a variety of tasks around the hive. These Giant Ants will have double the chance of mining precious metals.

Due to their alien intelligence, Myrmixians place value on a variety of strange things. Their Hoard Class reflects this reality — random bits of valuables scattered among what they consider to be "treasure." Feel free to have fun with this.