Now that I have established what Cruthanarc is and why Cruthanarc is, I have to get to the nitty-gritty of how and why various armies would be trying to kill each other on the surface of a planet nobody wants to be on. A very basic scenario would simply be a troop carrier or similar ship has an accident, gets shot down, or is otherwise forced to land on the surface. This would then unleash the locals to hunt down and find/destroy all the survivors.

While this does have its appeal, it lacks a larger storyline and limits me to always having to put the Infected Colony army on the table. I would much rather have multiple options for all the combatants. This leads me to imagine that the ship that is shot down over Cruthanarc has in its possession some kind of MacGuffin. For those unfamiliar, a MacGuffin is a plot device first used in film. It usually takes the form of an object that is necessary for the motivation of the characters. The kicker is that the MacGuffin is meaningless and insignificant in every other way.

In other words, it really doesn’t matter what was on the ship that breaks apart into multiple pieces as it hits the atmosphere of Cruthanarc. What matters is that it is important enough to several factions off world to risk contracting an incurable disease in order to retrieve it. The fun part of the creative process, especially one where play is concerned, the real nature of the MacGuffin may very well develop as the campaign to retrieve it progresses.

To begin with, I want to start with five such factions, because five fits neatly into a Wu Xing Diagram. Here are the five contenders and how I understand them in context of my version of the Sirius Sector:

Here is how these five fit into the Wu Xing Diagram: 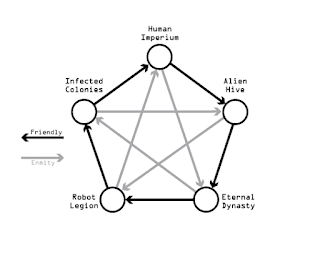