One of my goals in this little experiment is to demonstrate that at its core, 5e is just a bunch of mechanics. The reason this is important to me is that once seen as simply mechanics, there is a tremendous amount of freedom that we have as players of the game to describe those mechanics any way we want to.

At a fundamental level, this is why I prefer older versions of the game and the retro-clones that emulate them — they deal mainly with mechanics rather than the special effects those mechanics represent. It frees those of us who play the game to interpret those mechanics to look the way we want them to without all the effort that I am putting into this little project.

For someone like me, the level of detail that 5e goes to when it describes what their mechanics look like is an unending irritation. For example, one of the 1st level spells available to the TLoS fighter is Hail of Thorns. We are told that:

What if I want it to be a troop of fey that appear and fire their weapons with my character? Or what if I want the plants of the area to throw parts of their leaves and bark at the creature my character is firing at? Why can't the arrow hit the ground in front of the target and then explode into hundreds of little thorns into the face of the creature? There are all kinds of ways the mechanics of this spell can be described and rather than allowing imagination to run wild with the rules as written, I am forced to ignore hundreds of pages of fluff.

Enough whinging...here are a pair of .PNG files that redefine the 5e mechanics for the Ranger and turns them into an evocative version of the fighter, in the spirit of BX: 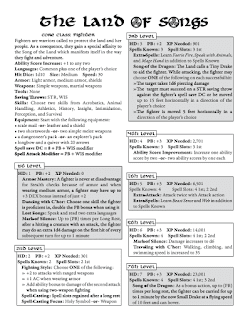 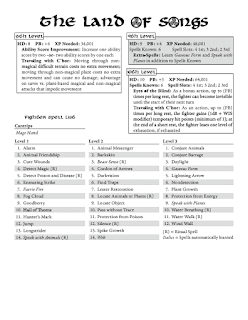