My eldest requested that I do a write-up of one of the worlds suggested by my last post. I'll cover some of the foundational stuff in this post, and then follow up with the seven classes re-skinned so as to make sense in the world that emerges from this little thought experiment. Thus, I bring you The Land of Songs: 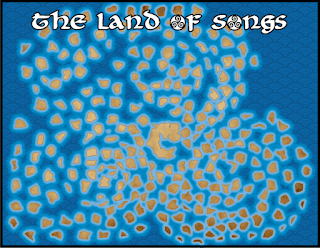 Known by the humans as Leóthland and the dragon kin as Eordracân, The Land of Songs is what most of the world calls the largest island in the world, at the center of the map above. The people of that island, however, know the entire world as The Land of Songs. This is due to their songs of how the world came to be.

The humans and dragon kin of The Land of Songs worship the Song of the Land, who is known in three particularities: Wóthbora the Singer, Leód the Song, and C'hor the Dancing. The Land was once one, sung into existence by Wóthbora through His Song while C'hor was dancing over the abyss.

Wóthbora gave language to the dragons so as to help teach humanity, to whom he gave the ability to sing — to be co-creators with Him. Rather than use their gifts to sing in harmony with Leód, humanity and dragon kind built an earthly empire that sought the heavens by their own power. So, Wóthbora stripped humanity of the Song, and the dragon kin of either their wings or their intelligence and ability to speak. He then broke the Land into islands separated by the sea.

Humanity and the dragon kin fell into silence and darkness; however, Wóthbora preserved one peoples and gave the Song back to them. These are the people of the Land of the Song, who strive to heal the wounds of the Land by teaching the world to Dance with the Song.

This is no easy task. It takes brave adventurers to cross the sea into unknown territories filled with ancient ruins from the fallen empire of humans and dragons. Shadows and monsters lurk within. The people of the Land, however, know that each island has its own melody that can add to the Song. Should the island be cleansed and  that melody be found, the island will return to its place as part of The Land of Songs.