The Monastery of St. Gaxyg-at-Urheim

About ten years ago (has it really been that long?) I drew a map for James Maliszewski over at Grognardia. At the time, there was a bit of an effort to create a "crowd sourced" megadungeon that used contributions from a variety of volunteers. Being a bit of a map geek, I drew several that James was pleased enough with that he shared them with the world at large.

If you hadn't noticed, after a long hiatus, James has started posting again over at Grognardia. He also let me know that he wanted to do something with one of those maps I drew all those years ago. You can find his musings here.

As a thank you, I thought I'd share another map that I drew for my own version of St. Gaxyg-at-Urheim. It briefly showed up in my Lost Colonies campaign very early on when Hamlen lost his beloved spiked club down an underground river. That river led to an underground waterfall which is at the bottom of the map. The club was found, some orcs were felled and then the party went off on one of their many tangents. Enjoy! 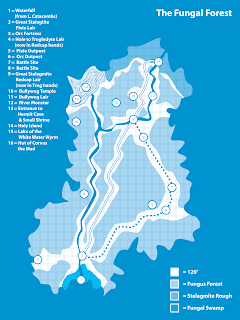