How I Homebrew a Dungeon

Justin Alexander has an interesting post about the decline of D&D Adventure Modules. His is a fascinating observation, and one that I am afraid I have to generally agree with. Although, as an aside, I must admit that in my experience as a Referee there are not many “good” adventures in the overall D&D library. I long for the shared experience of running particular adventures, but it is very rare that I find using a module at the table a good experience.

Since I have been thinking about how to prep a sandbox campaign with my middle child in mind, I thought it might be fun and useful to share some of my own techniques and thought processes when creating a 1st level dungeon adventure.

As another aside, I tend to use Swords & Wizardry to design adventures because its Monster Stat Blocks and treasure generation system are both nicely stripped down and simple. This saves on a lot of prep time. Also, at the table, I prefer converting from simplicity to complexity rather than the other way around.

I tend to start with a map. I am a highly (if not extremely) visual person. Thus, “seeing” the adventure helps me visualize what I want the adventure to be about. So, I went to the archives of maps that Dyson Logos provides and chose a “good” map.

By “good” I mean something that immediately introduces choice to players and offers several different routes to various locations via “loops.” I also like maps that have evocative features. In this particular case I like the underground “lake” as well as the natural dais in one of the large caverns.

Once chosen, I labeled each encounter area with a number: 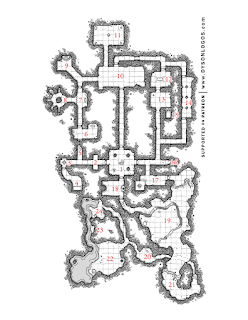 Strictly following the percentages of Moldvay’s “Stock the Dungeon Table” on B52 of his Basic D&D we get the following:

In order to get an idea of what Monsters to use, I pulled out The Tome of Adventure Design and rolled up an interesting name for the dungeon: The Dais of Imprisonment. Seems apropos, given my initial attraction to the natural dais in Room 19. It also suggests that there be some kind of monster dangerous enough to need a special prison. I also rolled up why the dungeon was abandoned: a disease wiped out the inhabitants 1000 years ago.

In his edition of Basic D&D, Holmes also has a useful table for stocking dungeons. He suggests that monsters up to “Three Levels Below Ground” can be found wandering on the First Level of a dungeon. Strictly applying the math of Holmes results in the following:

My first thought when it came to a “Level 3” monster to occupy “The Dais of Imprisonment” was a mummy, due to the disease factor implied by my random roll in The Tome of Adventure Design; however, the idea really didn’t inspire me much. Then I took a look at what monsters Moldvay has on his Wandering Monster Tables. That is where I saw a Medusa(!) on his Level 3 Wandering Monster list. Now that sounds interesting!

So, Room 19 has a magically sealed coffin suspended by chains atop the natural dais. Trapped inside is a Medusa, once a beloved ruler of her people and then cursed by her own lust for power. (Something to keep in the back of my head, but not something important until the players ask: can the curse be broken and how?)

For my Level 2 Monsters, I wanted to evoke the idea of diseased undead that were once the guardians of the prison. So, I chose Leper Zombies (found in Monstrosities). These two will be in isolated areas of the dungeon: Room 4 (which can only be opened by figuring out how to use the mechanism in Room 3) and Room 23.

This leaves the northern section of the map to populate with a tribe of kobolds and their pet boars who avoid the southern part of the map because they instinctively know better. They will occupy Rooms 10-14 with the chief and guards in Room 11.

Behind a Secret Door (which has not been found by the Kobolds), Room 15 is a nice place for a Treasure guarded by a trap.

Room 5 suggests a natural Trap of a collapsing ceiling.

Given their access to the Dais of Imprisonment, Rooms 17 and 18 are also good candidates for traps.

Technically, I have already placed a “special” in Room 3 so that leaves three:

Room 8 is very suggestive, given the coffins of the former guardians of the place. It could very well be a place of visions which suggest the dungeon’s past.

Given the long standing trope of magic pools, Rooms 22 and 24 are also good candidates.

Given its simplicity, I am very much attracted to hiding some treasure in Room 2.

As an aside, Room 16 is a set of collapsed stairs which gives me room to expand this dungeon if I want to.

That’s all my monsters, traps, specials and empty rooms.

In total I have the following monsters (and S&W XP values):

According to S&W, base treasure value is 1d3+1 times the total xp value. I am going to assume a roll of '3' for a pair of reasons. First, I want to give PCs an opportunity to level up. Second, I have a couple of "1.33" treasures according to the strict math of Moldvay's Stocking Table.

This gives me 5600gp of treasure value to play with.

500gp will be traded out for Minor Gems which result in 1100 gp in gems and jewelry.

Thus, there is a grand total of 6200 gp in treasure. Given that there are 6 Rooms with treasure, that means each room has approximately 1000gp with an extra 200gp to fill in wherever I think is cool in the moment. Note: This value can take the form of anything. For example, the treasure found with the Leper Zombie in Room 4 could take the form of 1000gp worth of burial urns and the the Kobolds could be enamored by the fact that they have a "massive" treasure of 100,000cp.

In total, there are 7800 potential xp for PCs to earn in this dungeon, or 1950 xp per PC in a party of 4 characters. With some XP bonuses, that gets us to approximately 2000 xp and a level up for Clerics, Thieves, and Fighters. Should Wandering Monsters be added to the mix, this dungeon is within spitting distance of giving everyone a good shot at leveling up.

There are two keys necessary to open the sealed coffin of the Medusa. The two Leper Zombies have one each.

I know my rolls did not produce a magic item, but to give players a chance at taking advantage of the waters in Room 24 I will place a +1 shield in the hands of the Leper Zombie in Room 4.

Despite all these opportunities to get an amazing weapon against the medusa, my dark sense of humor is tempting me to make the Medusa blind after being imprisoned for 1000 years in the dark. While robbing players of an easy kill (given that they have a mirror or the Gaze Reflection effect), it also means that the medusa is going to be at -4 on all her to-hit rolls.

The Skeletons and Zombies on the wandering monster table indicate that any dead who are left inside this dungeon are affected by the events of 1000 years ago and rise as undead.

Kobolds encountered outside of their lair are those that got too curious for their own good.

The Fire Beetles and Giant Rats are standard dungeon vermin.

The rest, I'd improvise at the table using visual cues from the map and the basic background information I've determined so far.

Given my own experience at the table, this sparse little document will result in a much more dynamic and fun experience than virtually any published module out there. Rather than having to wade through walls of text, I just have to describe what my imagination comes up with in the moment. An emergent story will be enhanced by player choice, action, and questions. In the end, I will have a mythology based purely on play that will go on to inform whatever campaign this exists in and possibly many others as well (depending on how cool that story becomes).