Yesterday, I posted about using a Wu Xing diagram to map out relationships between factions in a campaign world. Here is the actual diagram that I described: 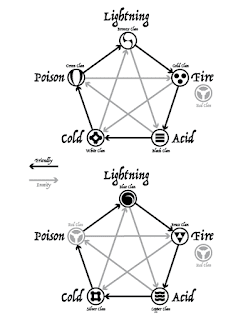 Using this, it can be fairly easy to start putting together a political plot and conflict that is the main background noise of a campaign.

A simple way to explain this is that the Brass Clan has married off one of their daughters to the head of the Red Clan, who is impotent and has no heirs. The Green Clan has exploited the anxiety within the Red Clan to place blame on the Brass Clan as a whole.

In the meantime, the Copper Clan has begun to suspect the Red Clan’s plans, but have so far been unable to convince the Silver Clan of the danger. They have thus resorted to working with the White Clan through their fellow Acid Faction member the Black Clan. The plan is to sow distrust between the Bronze and Blue Clans in order to disrupt the workings of the Red Clan.

See how wonderfully complex this all gets in short order?

As an aside, I plan to have the Fire Faction territory at or near the border regions of the Empire. In other words, they are the ones that are in charge of the campaign world’s version of the Great Wall. As both the Fire Clan and the Brass Clan begin to be ripped apart by the various political plotting began by the Green Clan, the defense at the Great Wall will weaken. This, of course, opens up the possibility of a major outside threat getting into the Empire and creating havoc.