One of the interesting things that happens when I go about any kind of thought experiment, is that it has a tendency of bleeding out into other facets of the game that I wasn’t necessarily interested in or intent on fiddling with. So, as my thoughts drifted towards what a B2 adventure module might look like if MMII dominated the monster section of a Moldvay Basic Edition of D&D, my brain took a stroll right past the traditional TSR adventure module and started thinking about a megadungeon.

Normally, the themes found in the MMII lend themselves quite nicely to the idea of a megadungeon, or least a multi-level dungeon. This set-up allows for each section of the dungeon to have its own feel, its own monsters and its own environment. Thus, play isn’t bogged down by a bunch of X by X rooms that all look the same and have monsters scattered about with no apparent rhyme or reason. On the contrary, it adds an element of discovery and excitement as players try to figure out what makes each section of the dungeon tick.

Unfortunately, my brain would not allow itself to be contained by a mere dungeon. Or a megadungeon, for that matter. Take a look at the three themes that can be gleaned from the monsters of the MMII that might show up in a Basic Edition: Fey, Lost World, Elemental.


This got me thinking about one of my favorite ideas from a module I have never played nor ever really plan on playing: D1 Descent into the Depths of the Earth. Contained therein is a hex map with various tunnels that a party can travel and explore. On that hex map are fixed encounter areas. Thus, while it is a dungeon crawl, it also feels kinda like an outdoor hex crawl. Given that the monsters I have available with an MMII monster section of a Basic Edition, why couldn’t I then have a hex crawl that felt like a dungeon crawl?

The end result was something I’m calling the Valley of Chaos: 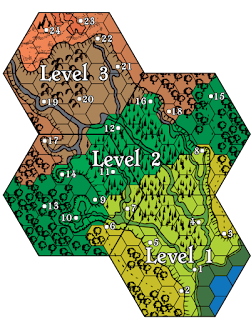 The white circle in the southeast corner labeled ‘1’ is the party’s home base. All the white squares are encounter areas with a small structure/dungeon/tower/cave network with 5-25 rooms. There are three distinct areas in and around the valley. The floor of the valley itself is the stomping ground of the fey. The forested areas above the valley have a Lost World atmosphere. The desert, volcano and lake of fire all are home to elemental creatures. The further away from home base the party wanders, the more challenging the going gets.

Note that like any good dungeon, there are multiple access points for parties to enter into the “dungeon.” There are established paths and river ways for the party to follow. Each branch ultimately leads to an encounter area. There are also things to be found off the beaten track. There is even a river way that encourages Referees/GMs/DMs to expand on so that a party can go off on higher level adventures.

All-in-all there are four 6-mile hexes with 23 encounter areas with approximately 200-300 rooms to explore. All of this is dressed up in several distinct environments, each with its own character and set of wandering monsters. All that is needed now is a back story to explain why all the monsters live there and why the valley looks and behaves like it does.

For me, one of the most exciting aspects of this set-up is that it realistically allows for dungeon factions to play a huge role in the adventure. As much as I love the feel and the play of dungeon factions, I have to suspend my disbelief every time I employ them because if such factions were in such close proximity to each other, why isn’t the dungeon a complete war zone with everybody dead? There are ways around this, I am aware, but it does take that extra step to make it work. In this case, the factions have enough space between them that raiding parties actually make sense.

Thus, here I have what feels like a tent-pole megadungeon that looks like a hex crawl and I think could be the beginning of something magical.

Labels: B2 The Keep on the Borderlands, megadungeon, MM2