While today is the feast of Sts. Cyrus and John the Unmercenary Healers, I am not really going to blog much about them. I do love them and have a great affinity towards Alexandria, where they were martyred; however, in terms of RPGs the only thing that I can think of to write about is the fact that one of the reasons the original cleric, which was in part modeled after Christianity, has spells like Cure Lights Wounds, Neutralize Poison and Cure Disease is likely because of these saints and those like them.

While potentially interesting, I have found myself drawn to St. Brigid of Kildare this week. Though her feast isn’t until tomorrow, her life has me itching to start drawing maps.

St. Brigid was born around A.D. 450, the daughter of a slave and her master. She was baptized by St. Patrick, Enlightener of Ireland and they were life-long friends. Due to her generosity to the poor, her father found her to be too expensive to keep as a slave and was set free. Afterwards, she was the founder of women’s cenobitic monasticism in Ireland and is considered to be one of the patron saints of Ireland along with St. Patrick.

The monastery that she established was on a piece of land given to her by the King of Leinster and called Cill Dara (now known as Kildare). Translated, the name means “church of the oak.” It was in the midst of an oak forest and was built from oaken timber.

There are a lot of stories from the various hagiographies of St. Brigid, but one of my favorites is of the blind nun Dara. One evening, the two sat and talked. Losing track of time, they found that their conversation had lasted the whole night and it was dawn. St. Brigid was astonished at the beauty of the morning light on the dew of the flowers in the field in front of her and longed for Dara to be able to see it all. Praying to God, she made the sign of the cross and Dara could see. Although she did find the morning scene to be quite beautiful, she asked St. Brigid to pray for her blindness to return, explaining, “for when the world is visible to the eyes, then God is seen less clearly by the soul.” St. Brigid prayed, and Dara was blind once again.

Interestingly, St. Brigid herself had only one eye because she plucked the one out in defiance of a suitor who was enamored with her beauty. She died in A.D. 523. 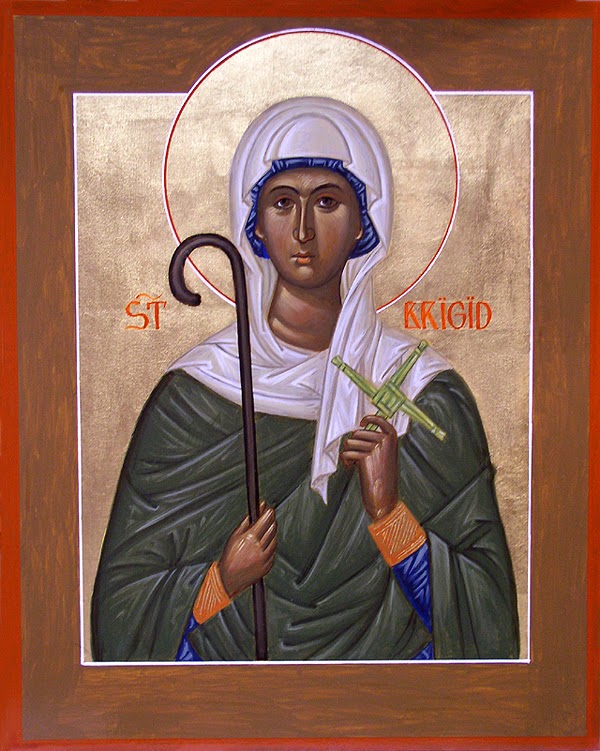 The RPG part of my brain has been gleefully chewing on the name “Cill Dara” and the story of Dara the blind nun all week. The fruit of that endeavor is an adventure locale akin to the Monastery of the Unsleeping Ones.

The Monastery of the Oak is literally a giant oak tree with a door in it. At one time, it was inhabited and cared for by an entire community of blind nuns. What is not generally known is that the oak actually sits atop a rift in time/space which allows all kinds of nasty things to come crawling into the world. It is also not widely known that the nuns actually lived inside the oak.

When a normal adventuring party opens the door of the giant oak tree, they will see a set of stairs going down. These lead to a section of your favorite megadungeon teeming with all kinds of monster badness. If, however, any member of the party is blind, blindfolded or otherwise cannot use their eyes to see, there are no stairs down, but rather a gate leading into the main grounds of a monastery which can only be “seen” by those who cannot use their eyes.

If the monastery is successfully entered and those who enter it begin to pray, the tear in time/space is closed. Thus, anyone entering the oak sans blindness or a blindfold would simply see the empty shell of an oak trunk. How and why the blind nuns no longer pray 24/7 to keep the tear closed is part of the mystery a party might stumble upon while exploring the dungeon and the monastery.