A Player's Map for Averoigne

Here is a map I've been working on. It is a four hex Player's Map for an Averoigne campaign centered on the village of Pergament and The Chateau des Faussesflammes (which lies only a few miles to the west of the map). Enjoy: 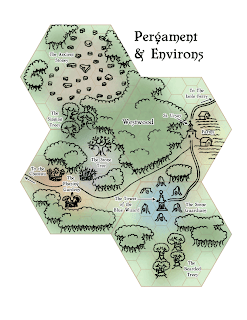