Although I do not share my father’s passion for all things associated with railroads (he has a collection of timetables), his love has managed to rub off on me at least a little bit. My table top play time over the years has been equally divided between RPGs, miniature war-games and board games. Of the latter, one of my favorites is the Empire Builder line of railroad games by Mayfair.

One of my oldest daughter’s favorite ways of spending time with her dad is playing board games with me. Although her favorite is Settlers of Catan, recently she indulged me by requesting that we play Empire Builder a couple of times.

For those of you who are not familiar with the game, Empire Builder is about building railroads in order to deliver various goods to various cities. Each player gets three demand cards, which have three potential deliveries and how much they pay. The goods are available only in certain cities, so each player spends money to build tracks connecting cities that have goods to cities that need those goods. The first player to $250 million while connecting the major cities on the map wins. 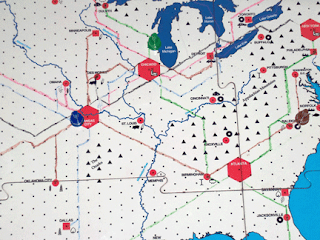 It occurred to me while playing with my daughter that there is a similarity between this game in process and the large scale map from D1-2 Descent into the Depths of the Earth: 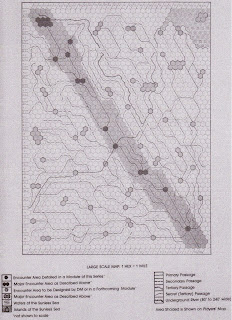 I love mini-games that help inform game and setting design. My favorite part of Traveller is the character creation mini-game — especially the expanded versions for military, scout and merchant careers. I find the process that GDW went through to produce the Traveller 2300 setting to be fascinating (I only wish they would let me play so I could produce my own version of the universe). Of course, I adore How to Host a Dungeon.

Therefore I began to wonder if it weren’t possible to create a large scale underground map ala Descent into the Depths of the Earth using a game of Empire Builder. Assign a classic underground race to each color (Black = Drow, Blue = Svirfneblin, Green = Kuo-Toa, etc.); re-skin the various goods found in the game with appropriate fantasy stylings (cars = giant striders, tourists = slaves, cotton = spider silk, etc.); and then play the game.

The race that wins become the dominate race of the underworld, with pecking order depending how the game ends. Railroads become underground passages. Cities become encounter areas, with major cities being major dungeons. The goods represent what encounter areas have in abundance. The various colored railroads determine who controls these encounter areas and which ones are in dispute.

Using the game pictured above, here is a large scale map of the depths one might come up with (note, I did rotate the map 90°): 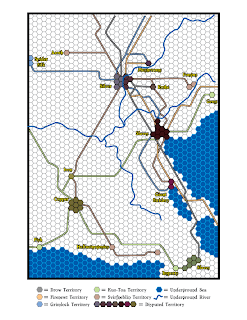 Though this might seem a bit sparse (it is only part way through a whole game), there is still a lot of implied information here.

For example, this provides some semblance of an under-earth economy. Goods are being traded or raided for. Therefore, when a party of adventurers clears out a particular encounter area, whatever goods that area produced is going to become scarce. The whole system and map will have an organic reason for adjusting to the presence of the adventurers. Does another faction try to reclaim what the adventurers have cleared out? Does the shortage heat up conflict in the underworld? Who benefits from this conflict?

In the end, it is a fun way to create a living, breathing underworld that will have enough basic information about it to really make it sing when adventurers come to play.