Today is the Feast of Sts. Menas, Hermogenes, & Eugraphos, Martyrs of Alexandria. Menas was a soldier and a skilled orator, which is why he sometimes called “Most Eloquent.” As such, he was sent from his native Athens to Alexandria to suppress riots that had arisen out of conflicts between pagans and Christians. Not only did St. Menas quiet the conflict, but openly preached the Gospel and converted many of the pagans to Christianity.

Having heard of this development, the Emperor Maximian (A.D. 235-238) sent Hermogenes to purge the city of Christians. In turn, he became a Christian once he saw that the wounds he was inflicting upon Menas miraculously healed.

Then Emperor himself then came to Alexandria; however, he refused to be mollified by either the stoic endurance of Menas and Hermogenes or by the miracles which attended their struggles. Rather, this all made him all the more angry. After personally stabbing to death St. Eugraphos, the personal secretary to St. Menas, he ordered Sts. Menas and Hermogenes to be beheaded. Their decapitated heads, along with that of Eugraphos, were then put into an iron chest and thrown into the sea. Subsequently, these relics were recovered and brought to Constantinople in the ninth century. 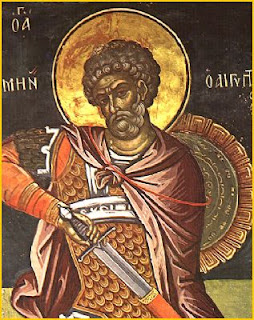 For me, the most intriguing part of the this story is the disposal of the saints’ decapitated heads and their subsequent recovery. Can anyone say undersea adventure?

The scenario that immediately leaps to mind is to place a ruin off the coast (possibly hinted at in a treasure map). This ruin is the lair of a Water Naga. She is possession of an iron chest that she is willing to barter for the return of a magical item stolen from her by a group of sahaugin (or some other group of undersea denizens).

I realize this is derivative of something that I did in my Lost Colonies campaign, but I really like the potential of a party either going to the trouble of retrieving said magic device or defeating the naga for the iron chest only to find in contains three skulls. The irony, of course, being that these three skulls, as religious relics, are possibly far more valuable than whatever treasure stolen from the naga in the first place.

Here are some possible powers that the three skulls could give to those who know what they are: