If, as I do, one wants to place Portown and the example dungeon from Holmes into the region of the Grand Duchy of Karameikos, there is the rather difficult problem of where to place it. Holmes describes it this way:

Portown is a small but busy city linking the caravan routes from the south to the merchant ships that dare the pirate-infested waters of the Northern Sea. Humans and non-humans from all over the globe meet here.

In addition, the location of Zenopus' tower is above some cliffs looking over the sea. Thus, Portown lays next to the sea, along a coast line that runs north and south.

Cook informs us that the Black Peaks/Cruth Mountains/The Steach are on the north edge of the map and that there are easterly winds coming off of the sea. These two appear to be contradictory. There is a rather large and long mountain range that runs along the top of the map in Cook (who provides no compass rose), but the sea runs along the bottom of the map. This means that, except for a small peninsula south of Specularum, there really isn't any way for easterly winds to come off the ocean if the top of the map is, indeed, north.

I am going to take advantage of this contradiction, the lack of a compass rose and the various ways the word easterly can be defined to "rotate" the map provided by Cook 90° so that Fort Doom is north of Specularum. This accomplishes two things:
The main problem with orienting the map this way is that the mountain range is no longer "running along the north side of the map" as Cook describes it. There is a portion of the range, however, that does now curve towards the west at the north edge of the rotated map. If the names Black Peaks/Cruth Mountains/The Steach are limited to this section in the north (leaving room for other sections of the mountains to be named at a later date), then Cook's description of this mountain range is generally true.

This means that the caravans coming from the south that Holmes describes as transferring their goods to ships to go north are coming from Specularum and Fort Doom. This places Portown either on the northern half of the Gulf of Halag or further up the coast. The most likely place for Portown would be the river mouth that empties into the Gulf.

There are now two questions that need to be answered:

The first has one of two answers: either the area is infested with something even more dangerous than pirates, or the geography makes it impossible for caravans to get across. The latter is most likely (if that something is so dangerous, why isn't it eating the pirates?). I suspect the mountains continue to swing west until they meet the sea, making caravan travel impossible.

The answer to the second question depends upon whether the Grand Duchy is in the northern or southern hemisphere:
Here is a close-up map I've created to show the location of Portown (note, I've also placed Skull Mountain in the area so that there are plenty of adventuring opportunities in the immediate area): 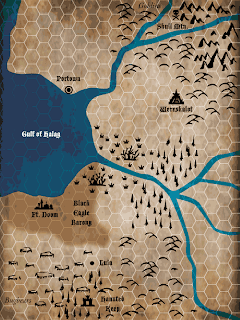