One of my favorite things in the world is heraldry. I love how it tries to communicate ideas through simple graphic cues and how variations in those cues can be a wealth of information. Thus, when I started thinking about the various monastic orders I posted the other day, I also began thinking about what crosses these orders would use and why. Here is a rough draft: 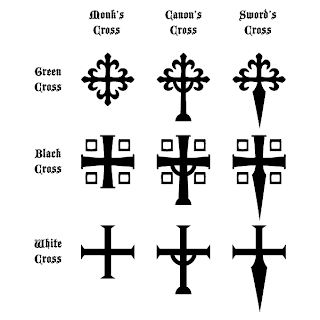 The flowery Green Cross in comparison to the simple and austere White Cross implies a counter-intuitive logic of prayer vs. work. One might think that Green Monks would prefer something like the White Cross, being that they are such an austere order; however, prayer is an elaborate and beautiful endeavor. Thus, they wear an elaborate and beautiful cross. The Black Cross, with the four squares surrounding it visually suggest their quest for balance between prayer and work.